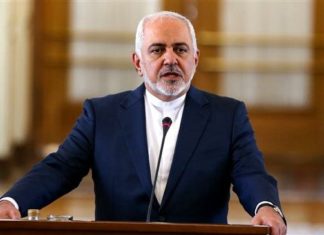 Iranian Foreign Minister Mohammad Javad Zarif says Tehran is ready to exchange prisoners with dual citizenship jailed in Iran with Iranian prisoners held in the US.

Speaking in an exclusive interview with Sputnik on Thursday, the Iranian minister noted that at present Iran is not detaining any American prisoner with single citizenship.

Zarif made clear that Iran was not yet ready for direct negotiations with the US government and would be using other governments, such as the Swiss, “that wish to play a positive role in this regard”, as an intermediary.

He said the United States must compensate the damage that Iran suffered if it wants to return to the nuclear deal.

“The return of the United States to the nuclear deal is the first step that they should take. For this return, [the US] must compensate for damage that it caused to the Iranian nation, as well as for measures taken by the US to undermine the nuclear deal and promise to not do it again,” Zarif added.

The top diplomat noted that every country has a right to peaceful use of nuclear energy, but the West has double standards about different states’ nuclear programs.

“We believe that all of the countries have the right for a peaceful use of the nuclear energy, including [uranium] enrichment, and this right must be exercised in a transparent manner in line with regulations issued by the IAEA (International Atomic Energy Agency).”

“The Western countries have double standards in this regard. If a similar control, which is carried out towards Iran, is introduced on other countries that want to have an advanced nuclear program, the international community will be in peace,” Zarif said, apparently referring to the Saudi and UAE bids to launch their own nuclear programs.

He further pointed to the move by Bahrain and the United Arab Emirates to normalize their relations with Israel, saying the two countries backstabbed Palestine by reaching the deals with Israel.

However, he added, the ceremony in the White House was not a big issue anyway, since Israel and the Arab nations have maintained contacts in the past 20 years.

“What happened in the White House was not a major development, but rather a photo opportunity that uncovered the relations that have existed for 15 or 20 years between the Arab countries along the southern coast of the Persian Gulf and the Zionist regime. These relations indicate that the slogans voiced by these countries in support of the Palestinian people are untrue, but are in actual fact a stab in the back for the Palestinian cause,” Zarif said.

The Iranian foreign minister expressed the belief that Israel’s relations with Bahrain and the UAE would “surely hurt peace in the region and the Middle East”, as they encouraged Israel to “oppress the aspirations and rights of the Palestinian people.”

“For this reason we have disputed these relations considering that they are at the expense of the region and its peoples,” Zarif added.

At the same time, the foreign minister noted that Iran was ready to improve relations with the neighbours.

According to the foreign minister, should the Persian Gulf states at any time be ready to build good relations with Iran, Tehran will wish for that as well.