Iran sanctions to be lifted one after another: President Rouhani 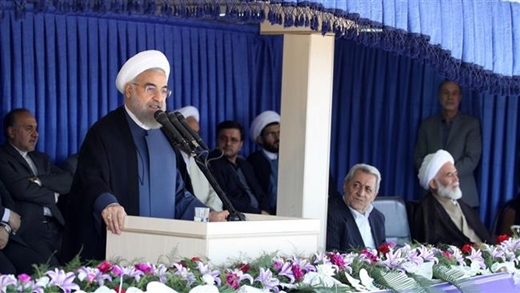 President Rouhani said his administration has gone beyond expectations in achieving its objectives in its first two years in office.

President Hassan Rouhani has said sanctions against Iran will be lifted one after another with the conclusion of the recent agreement between the Islamic Republic and P5+1.

President Rouhani made the remark in an address to a large crowd of people in the western city of Hamedan on Tuesday.

He said his administration has reached a point where it had the anti-Iran sanctions annulled at the very institution and by the very group that had imposed them in the first place.

The Iranian president said the Islamic Republic has succeeded in not only having the sanctions resolutions annulled – without even a moment of having implemented them – but also in establishing its right to uranium enrichment “not just as a slogan but through UN resolutions.”

He was referring to Resolution 2231 (2015), which was unanimously approved by the UN Security Council on July 20 to endorse the agreement between Iran and P5+1.

Referring to the country’s economic situation, Rouhani said his administration has gone beyond expectations in achieving its objectives in its first two years in office.

“We promised people that we would reduce the inflation rate step by step. [Iran’s] Statistics Center released figures two days ago, which show that… inflation has fallen below 14 percent and reached 13.8,” he said.

Iran has seen its inflation rate decline from its peak of over 40 percent under former President Mahmoud Ahmadinejad two years ago.