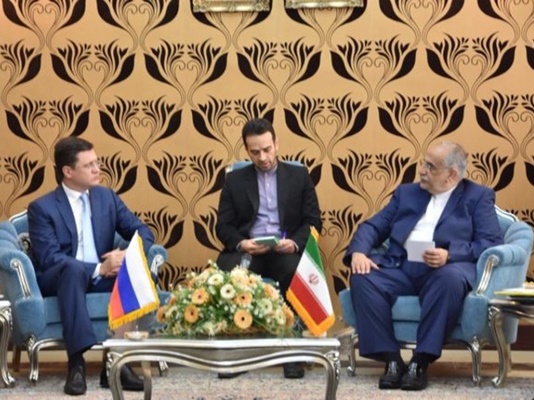 Iranian Minister of Economy, Masoud Karbasian, says the trade volume between the Islamic Republic of Iran and Russia has witnessed a 70-percent growth over the past year.

“Fortunately, the economic ties between Iran and Russia have been expanding steadily over the past year so much si that we had a 70-percent growth in our trade volume,” Karbasian was quoted as saying by the Azad News Agency (ANA) following his meeting with Russian Energy Minister Alexander Novak.

He also referred to the trilateral meeting in Tehran between Iranian, Russian and Azerbaijani leaders as well as the upcoming meeting of Iran-Russia Joint Economic Commission and said his meeting with the Russian official was part of preparatory arrangements for the mentioned meetings.

“The meeting was a good opportunity to have a review of our bilateral relations,” he said, adding there are appropriate grounds for further cooperation between Iran and Russia in such fields as economic investments, launching Bushehr Nuclear Power Plant, Bandar Abbas 1400MW Water Treatment Plant and undertaking joint sea and rail transportation projects, agricultural projects and establishing oil and gas cooperation.

The minister also said negotiations over Iran’s cooperation with the Treaty on the Eurasian Economic Union, its banking problems and customs cooperation with Russia to establish a green channel for the Iranian tradesmen are at their final stages and added the expansion of ties between Tehran and Moscow will have great achievements.

For his part, the Russian minister said the election of Karbasian as the Iranian head of the Joint Iran-Russia Economic Commission will pave the way for further cooperation between the two sides.

“Today, we held in-depth talks on ways to increase bilateral relations in economic field and adopted appropriate decisions for future projects,” he noted.