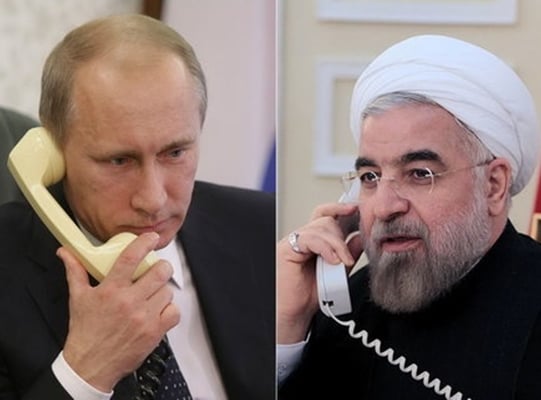 Iranian President Hassan Rouhani and his Russian counterpart Vladimir Putin have voiced their strong opposition to the presence of foreign troops in Syria, urging that the war-torn country’s sovereignty must be respected.

In a telephone conversation on Tuesday, the two sides discussed the results of the recent Syrian National Dialogue Congress held in the Russian city of Sochi, and expressed their preparedness to promote the formula of Astana Process in resolving the Syria crisis.

The two leaders then expressed their opposition to the imposing of any decision on Syrian people by foreign powers, saying it is the Syrian people who should decide about their future.

“Iran is against the presence of any foreign troops in Syria without the approval of the country’s government and nation,” Rouhani was quoted as saying in a Farsi report by the Iranian president’s official website.

He also noted the continuation of tension in northern Syria is not in the interest of any side and stressed that all regional states must respect the territorial integrity and sovereignty of Syria.

The Iranian president then highlighted the importance of trilateral cooperation underway among Tehran, Ankara and Moscow in fight against terrorism and restoring stability to Syria, and said this cooperation must continue till the final victory of Syrian people over terrorist groups.

Elsewhere in his remarks, Rouhani denounced certain states for their efforts to hamper the implementation of the Iran nuclear deal and said the Islamic Republic will remain committed to the deal as long the other sides do so.

He then dismissed as baseless the US officials’ claim that Iran is providing Yemen with missiles and said the allegations are part of the US administration’s effort to undermine the Iran nuclear deal.

For his part, the Russian president said his country is determined to expand its ties with Iran in all fields and added Russian companies are active in pressing ahead with joint projects signed between Iran and Russia.

The Russian president then praised JCPOA as an important achievement and said Moscow rejects any effort to undermine the deal as a dangerous move. “We have already clarified our stance on this issue for the other parties to the deal.”

He then said Iran and the Eurasia Economic Union have almost finalized talks over a temporary agreement to create a free trade zone and added with this agreement the two sides’ cooperation will enter a new phase.

The two presidents also expressed concern over the conditions of people in Yemen and underlined the necessity of expanding bilateral cooperation to restore peace to the war-torn country.