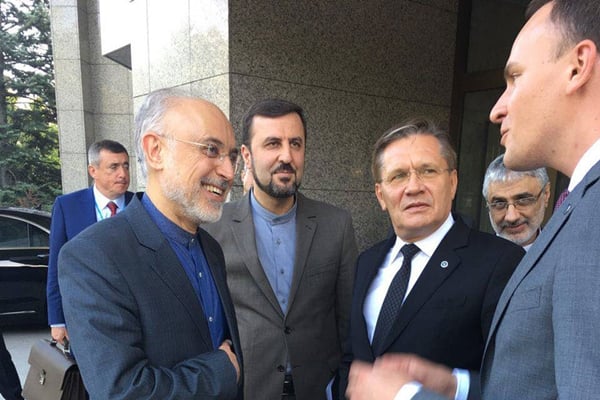 Iranian and Russian nuclear chiefs have sat down for talks on the fringes of the 62nd Annual Regular Session of the International Atomic Energy Agency (IAEA) in the Austrian capital, Vienna.

Ali-Akbar Salehi, the head of the Atomic Energy Organization of Iran, said on Monday the AEOI is interested in mutual scientific collaboration as well as cooperation in the fields of research and development in the domain of peaceful nuclear energy and its peaceful applications on different fronts.

He made the remarks in the meeting with Alexey Likhachev, the CEO of the Russian State Atomic Energy Corporation ROSATOM.

The two sides also reviewed the latest situation of new power stations currently under construction. They further discussed the production of stable isotopes used in industry and medicine. The two sides further reviewed grounds for the establishment of laboratories needed in that regard.

Likhachev, for his part, reiterated his country’s support for the Iran nuclear deal known as the Joint Comprehensive Plan of Action (JCPOA). He also described as successful Russian President Vladimir Putin’s recent trip to Tehran, welcoming further deepening of mutual cooperation in different areas in the nuclear industry sector.

He said ROSATAM stands ready for bilateral cooperation with the AEOI to produce reactors with average power in order to generate electricity and desalinate water.

The IAEA meeting opened in Vienna on Monday and will run for four days. High on the agenda is the IAEA’s latest report on Iran’s compliance with the JCPOA.