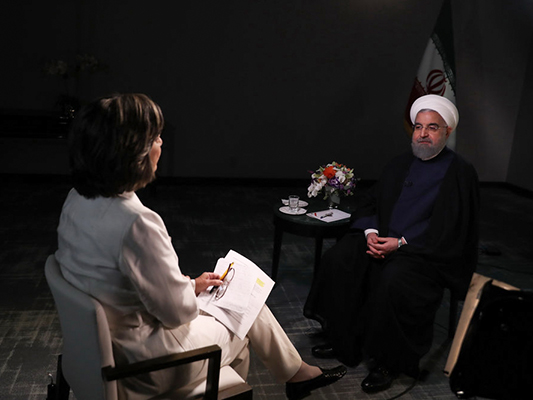 Iran’s President Hassan Rouhani says the US would pay “a high cost” should it withdraw from the 2015 nuclear deal between Tehran and world powers.

Speaking in an exclusive interview with CNN’s Christiane Amanpour, the Iranian president said “exiting such an agreement would carry a high cost for the United States of America.”

“I do not believe Americans would be willing to pay such a high cost for something that will be useless for them,” Rouhani said in the Monday interview.

Rouhani said such an action by the Trump administration “will yield no results for the United States but at the same time it will generally decrease and cut away and chip away at international trust placed in the Unites States of America.”

Rouhani said Iran was ready to respond to the possibility of Trump walking away from the agreement.

“Given that Mr. Trump’s actions and reactions and policies are somewhat unpredictable, we have thought long and hard about our reactions,” he said.

He said any riposte from Iran would come “quite swiftly” and “probably within a week,” adding that “if the US wants to increase the tensions it will see the reaction from Iran.”

Rouhani further warned of the diplomatic precedent that would be set by pulling out of the Iran agreement, especially with regard to North Korea.

“But keep in mind please that if the United States wishes to withdraw from the JCPOA, why would the North Koreans waste their time in order to sit around the table of dialogue with the United States, because they would think perhaps after years of talks and a potential agreement the next US administration could step over or pull out of the agreement.”

On the war in Syria, Rouhani stopped short of declaring an outright victory for the Syrian government, which Iran has supported on the ground, but described Tehran’s intervention as a success.

“Our actions were successful and today we are witnessing the final stages of the defeat of ISIS,” he said, before calling for eventual elections in Syria.

“The future of Syria will be determined by talks and ultimately the opposition must reach an agreement with the government,” he added.

Rouhani also noted that the ballot box should ultimately determine what happens.

CNN also asked Rouhani about Iran’s position regarding the current crisis in Myanmar, where the government has been accused by the UN of ethnically cleansing Rohingya Muslims. The Myanmar government has denied this, claiming security forces are carrying out counter attacks against “brutal acts of terrorism.”

Rouhani said that Myanmar should be condemned and that aid should be forwarded to Bangladesh, where hundreds of thousands of Rohingya refugees have fled in recent weeks.

He also said he shared concerns that ISIS and al-Qaeda fighters in Syria and Iraq could move across to Bangladesh and Myanmar to exploit the Rohingya crisis.

Asked about a number of prisoners with dual nationalities kept in Iranian jails, Rouhani said he had his own views on the subject of detained foreigners and dual citizens, but that he was obliged to follow the Iranian Constitution which had enshrined the separation of powers between the executive and the judiciary.