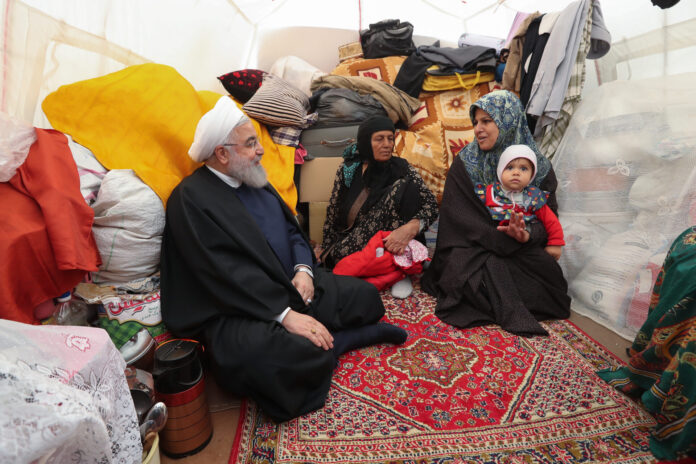 Iranian President Hassan Rouhani has visited flood-hit areas in Lorestan and Khuzestan provinces in western and south-western Iran, vowing to compensate for the damages as soon as possible.

Speaking to residents of the flood-stricken city of Pol-e Dokhtar on Saturday, Rouhani said the reconstruction of Pol-e Dokhtar, Ma’moulan and other cities and villages of Lorestan province which are suffering from heavy damages due to the latest deluges are among the main priorities of the government.

“The hearts of all Iranians are beating for the flood-hit residents of Lorestan. We will stay behind you till all the problems are removed. The government will make the arrangements to reconstruct the ruined areas immediately,” he said.

The Iranian nation and government became aware of Pol-e Dokhtar flood hours after the deluges hit the city, he said.

“In the early hours when you were besieged by floods and there was no access to the city, I was in touch through phone with Lorestan governor and closely followed up the situation in the city. Though heavy damages have been inflicted on the city, we thank God that there has been no casualty in the city.”

The Iranian president then referred to the self-sacrifices made by the brave people of Pol-e Dokhtar during the Iraqi imposed war on Iran under former dictator Saddam and said today all Iranians from all walks of life as well as the Army, Islamic Revolution Guards Corps, and voluntary [Basij] forces have rushed to help flood-hit people.

“The reconstruction of the ruined areas will be carried out by the Interior Ministry. I’ve already ordered the Ministry to immediately help those affected severely by the floods. The financial support will be given based on a timetable to be developed by cabinet ministers,” he said.

Later in the day, Rouhani left Lorestan for Khuzestan, where many cities are still grappling with deluges.

The recent floods in Iran, which started on March 19, have so far claimed at least 76 lives, and devastated thousands of houses.