Iran Open to Any Plan for Rise in Oil Sales: President 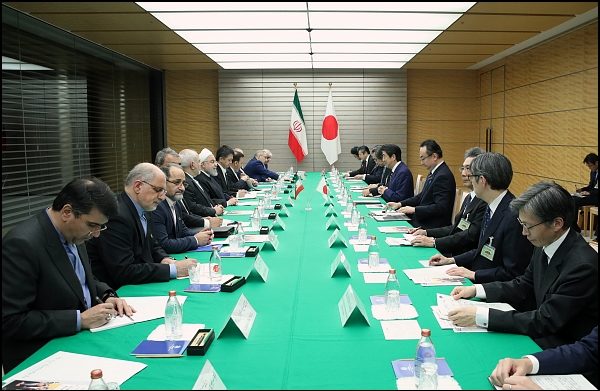 President Hassan Rouhani has, in a meeting with Japan's premier, expressed Tehran’s readiness for any plan to enhance economic relations with foreign countries and increase its sale and export of oil.

In a Friday meeting with Prime Minister of Japan Abe Shinzo in Tokyo, President Rouhani highlighted Iran’s contribution to regional and international peace, saying Tehran has worked in cooperation with the neighboring and regional countries to that end.

Hailing Japan’s support for the Iranian-proposed Hormuz Peace Endeavour (HOPE), the president said, “Iran has always fulfilled its responsibility to ensure regional security, and we believe that the Persian Gulf security has been upset by the foreign countries.”

“In order for regional security to prevail, we must eradicate unilateralism, and make the ones pursuing plans other than cooperation on the basis of international regulations realize that they have to choose a different path,” President Rouhani added.

Lauding the close relations between Iran and Japan over the past 90 years, the president said the many meetings between the heads of the two countries during the past six years indicate the cordial and growing ties between Tehran and Tokyo.

President Rouhani also called for efforts to enhance the bilateral ties in various fields, noting, “The two countries can boost cooperation in diverse areas such as energy, science and new technologies, medicine, tourism, sports, customs affairs, as well as the industrial, economic and trade relations.”

Stressing the need for all countries to respect the UN Security Council Resolution 2231, President Rouhani said, “The US sanctions amount to economic terrorism, and the countries fighting against terrorism must stand against this American move as well.”

“Iran has done and will do its utmost to save the JCPOA within the framework of its interests, and we call on the other JCPOA parties to honor their commitments,” he added.

He also noted that the JCPOA parties could force the US to correct its mistakes and follow the right and legal path by fulfilling their commitments to the nuclear deal.

The Iranian president further expressed Tehran’s readiness for any plan for increased economic interaction with the other countries, particularly those resulting in a rise in Iran’s oil sale and export.

Describing the JCPOA as a good model for peace and friendship among the nations, President Rouhani said a phased reduction in Iran’s commitments to the nuclear deal took place after the US withdrawal from the agreement and the Europeans’ failure to meet their commitments.

Washington’s exit from the JCPOA and the imposition of unprecedented sanction on the Iranian nation were not in the interests of anyone, the Iranian president deplored, adding, “The American violation dealt a blow not only to a major international agreement, but also harmed the peace and friendly political relations among the countries.”

Iran welcomes any effort from the other countries to salvage the JCPOA and ensure regional and international security, peace and stability, he underlined, adding, “Naturally, we would not decline any negotiation and agreement within the framework of our interests in this regard.”

“Throughout these years, Iran has proved that it fulfills its interests with logic and dialogue, and has always maintained that effective and lasting agreements would be possible with the logic of dialogue and the win-win concept.”

Slamming the US’ move to scrap the JCPOA as a damage to peace and security, President Rouhani said such American exit did not benefit any party and proved that the sanctions are doomed to be a lose-lose policy.

The Iranian president finally expressed hope that all countries, including Japan, would push for saving the JCPOA.

The Japanese prime minister, for his part, said the reciprocal visits by the Japanese and Iranian official in the recent years have enhanced the bilateral ties.

The Japanese leader also called for the immediate implementation of the agreements in the tourism industry to boost the relations between the two nations, and highlighted the significant role of the private sectors in the enhancement of economic ties between Iran and Japan.

Japan has always supported the JCPOA and will continue efforts in that regard, the Japanese leader added, saying Tokyo has launched cooperation with the three European parties to the JCPOA.

President Rouhani has travelled to Japan after participation in the KL Summit 2019 in Malaysia.