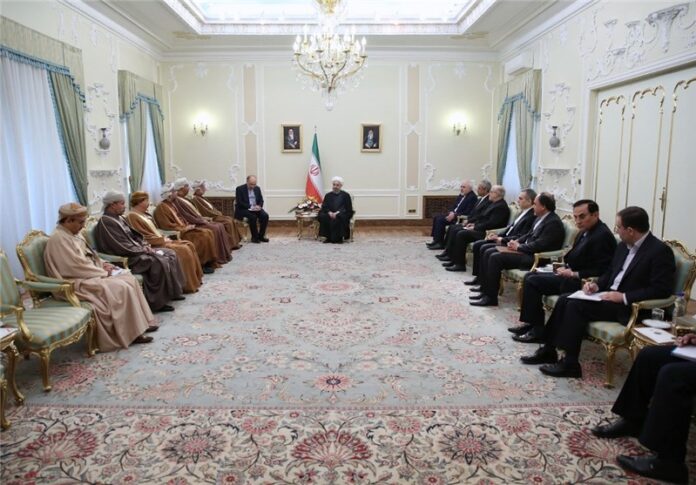 Iran’s president and Oman’s foreign minister in a meeting in Tehran weighed plans for enhancement of bilateral economic ties in a range of fields, with both sides voicing readiness to facilitate investment activities of the two countries’ private sectors.

“The relations between Iran and Oman, which are based upon friendship, fraternity and mutual trust, are exemplary, and Tehran welcomes the expansion of economic cooperation with Muscat,” Iranian President Hassan Rouhani said Sunday at a meeting with Oman’s Foreign Minister Yusuf bin Alawi, in Tehran.

The president also called for efforts to seize the opportunities for economic cooperation, ushered in by the termination of anti-Iran sanctions under the Joint Comprehensive Plan of Action (JCPOA), a lasting nuclear deal between Tehran and the Group 5+1 (Russia, China, the US, Britain, France and Germany).

President Rouhani noted that the private sectors of Iran and Oman can promote cooperation in the development of ports, civil aviation, railroad transportation and banking activities.

He also expressed Iran’s readiness to facilitate the activity of Omani investors and merchants, calling on Muscat to do the same for Iranian traders.

The visiting Omani diplomat, for his part, said the sultanate welcomes the presence of Iranian merchants by offering them special trade facilitation.

Bin Alawi said Iran and Oman’s economies complement each other, which is the more reason for the promotion of mutual cooperation between the two nations.

Iran and Oman share age-old and close diplomatic, economic, and military ties. Sultan Qaboos played an important role in facilitating the early stages of nuclear talks between Iran and world powers, which led to the JCPOA.