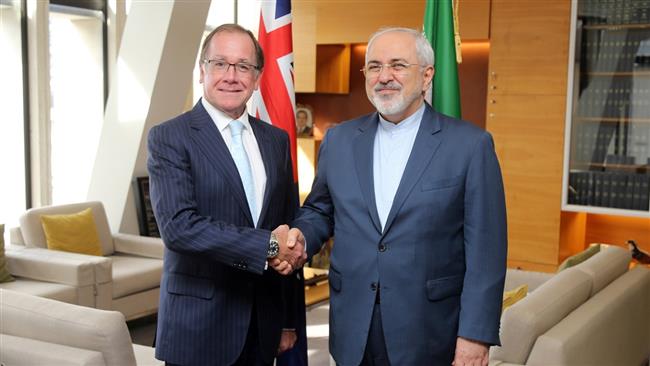 The foreign ministers of Iran and New Zealand on Sunday emphasized the importance of expanding bilateral relations, particularly in the economic sector.

Iranian Foreign Minister Mohammad Javad Zarif, who had arrived in New Zealand a day earlier on the fifth leg of his Asia-Pacific tour, held a meeting with his New Zealand counterpart Murray McCully in Wellington.

Zarif said Tehran is ready to take major steps to expand ties with Wellington in all fields, while McCully, for his part, said Iran plays a leading role in finding ways to settle regional issues.

In another meeting with Iranian nationals residing in New Zealand on Sunday, Zarif called on the nationals to make use of opportunities created after the removal of sanctions against the country.

Zarif said it was actually the Iranian people who made the sanctions fail, adding, “Resistance and wisdom of the [Iranian] nation proved that no Iranian individual should be threatened.”

On January 16, Iran and the P5+1 group of countries — the United States, France, Britain, Russia and China plus Germany — started to implement the JCPOA which was reached between the two sides on July 14, 2015, following two and a half years of intensive talks.

Zarif arrived in New Zealand after he wrapped up his official two-day trip to Thailand, where he participated in the 14th Asia Cooperation Dialogue (ACD) Ministerial Meeting.

The Iranian minister started his six-nation tour on March 6 and paid visits to Indonesia, Singapore, Brunei and Thailand. At the end of his trip to New Zealand, he is scheduled to visit Australia on the last leg of his tour.