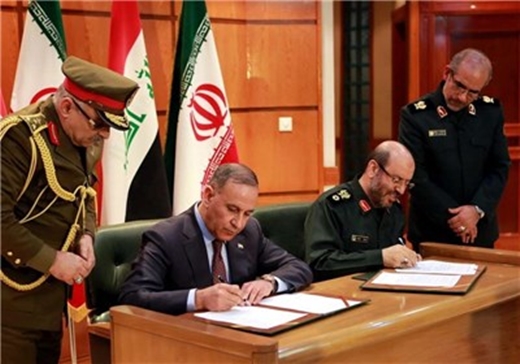 Iran is prepared to increase military cooperation with Iraq to strengthen stability and security in Iraq and the region, said the defense minister.

Iranian and Iraqi defense ministers in a telephone conversation on Tuesday reaffirmed their commitment to concerted action against terrorism.

Iranian Defense Minister Brigadier General Hossein Dehghan and his Iraqi counterpart Khalid al-Obeidi discussed the latest developments in Iraq as well as the bilateral and international issues in the conversation.

They both emphasized the need for Tehran-Baghdad cooperation in the fight against terrorism.

Reiterating Iran’s support for the Iraqi nation, government and armed forces, Dehghan said Tehran is ready to speed up the implementation of previous agreements with Iraq.

He also voiced Iran’s preparedness to increase military cooperation with its western neighbor to strengthen stability and security in Iraq and the region.

The Iraqi minister, for his part, called for efforts to accelerate the implementation of agreements.

In December 2014, Dehghan and Obeidi signed a memorandum of understanding (MoU) in Tehran to boost the two neighboring countries’ defense cooperation.

The agreement was aimed at expanding cooperation between the two sides on the establishment of a national army in Iraq to help the Arab country maintain its territorial integrity and security.

The two sides also decided to continue their consultations on finding mechanisms for ensuring security in the region.