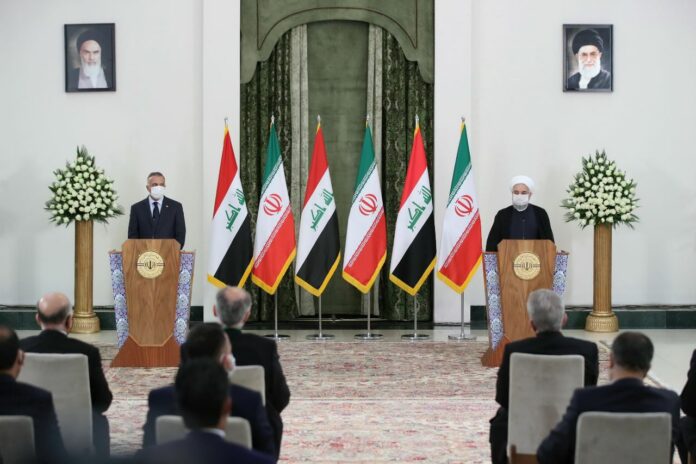 President of the Islamic Republic of Iran and Prime Minister of Iraq have made a resolute decision to raise the value of annual trade exchanges between the two countries to $20 billion.

Speaking at a joint press conference after a meeting in Tehran, Iranian President Hassan Rouhani and Iraq’s visiting Prime Minister Mustafa al-Kadhimi said the two countries are determined to increase the value of bilateral trade exchanges to $20 billion by promoting economic cooperation.

Describing the Iraqi premier’s visit to Iran as a milestone in the expansion of relations between the two “friendly and brotherly” nations, President Rouhani said the trade ties between Tehran and Baghdad have improved during the few months after Prime Minister al-Kadhimi has taken office.

The president then noted that the negotiations with the Iraqi premier have also revolved around the coronavirus pandemic and the health conditions across the region, assuring the Iraqi government and nation that Iran will support the Iraqi people with all power and capabilities by providing the medical and pharmaceutical supplies.

“The Islamic Republic of Iran has the needed capability and facilities to supply Iraq’s health and pharmaceutical demands,” President Rouhani said.

The president further unveiled plans to carry out the agreements that the two countries had signed during his visit to Baghdad back in March 2019, including the railroad project connecting Iran’s Shalamcheh to Iraq’s Basra an the plan to dredge the Arvand Rud.

President Rouhani then reaffirmed Iran’s commitments to supporting the Iraqi nation, government and Army in the fight against ISIS terrorists and contributing to stability and security in Iraq and the region.

Paying tribute to top Iranian commander Lt. General Qassem Soleimani and Iraqi commander Abu Mahdi al-Muhandis as “two heroes of the fight against terrorism”, the president said they made great efforts to ensure security in Iraq.

President Rouhani finally noted that he and Prime Minister al-Kadhimi have talked about the regional security and stability as well as the role of Iraq in the region as a powerful Arab country.

For his part, the Iraqi premier said he has visited Iran to strengthen the historical, cultural, and religious bonds with its neighbor.

He also stressed the need for closer cooperation and coordination between Iraq and Iran amid the current delicate situation, as the two countries are faced with the coronavirus-related challenges and a decline in the oil prices.

“Iraq is willing for and favors premium relations with the Islamic Republic of Iran on the basis of non-interference in the internal affairs of the two countries,” al-Kadhimi added.

He also praised Iran as one of the first countries that assisted the Iraqi nation in the war against terrorism and Takfiri groups, saying Iraq is also standing by Iran to help it overcome the economic challenges.

“Iraq’s relations with Iran and the other countries are based upon goodwill, and we try to find ways for the region to rise to the existing challenges through such cooperation,” he noted.

The prime minister then made it clear that Iraq will never allow its soil to be used for any threat to the Islamic Republic of Iran, stressing that defending Iran is one of Iraq’s priorities.

“In Iraq, we seek stability, and our view and philosophy regarding Iran is that it is a stable, powerful and developing country, which we believe would benefit Iraq and the region,” al-Kadhimi stated.

The prime minister finally expressed gratitude to Iran for supporting the Iraqi nation in the battle with the coronavirus pandemic.