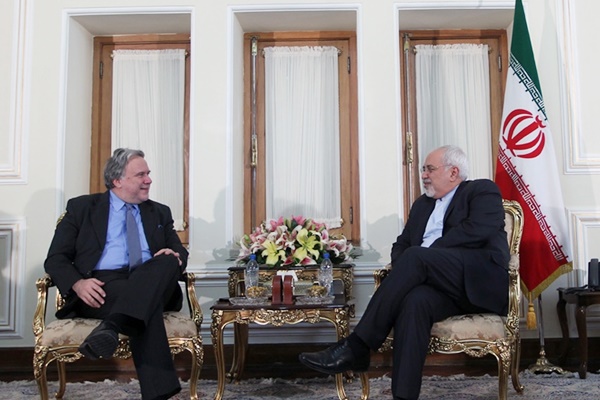 Iranian Foreign Minister Mohammad Javad Zarif described the bilateral ties between Iran and Greece as being on the right track, saying the two sides are resolved to develop the relations.

In a Sunday meeting with Alternate Minister of Foreign Affairs of Greece George Katrougalos in Tehran, Zarif expressed satisfaction with the existing trend of relations between Tehran and Athens, saying they are on the “right path”.

He added, “There is goodwill as well as political resolve between the two sides to further expand their ties in all political and economic areas.”

Katrougalos, for his part, stressed the important role of the Islamic Republic in the region and world, expressing his country’s resolve to cement ties with Iran.

Katrougalos also met Iranian Deputy Foreign Minister for American and European Affairs Majid Takht Ravanchi. During the meeting, the Iranian diplomat highlighted the abundant opportunities for cooperation with Greece, saying the two countries have common stances on a lot of issues.

Takht Ravanchi hailed the friendly relations between Iran and Greece, pointing to the serious determination for the expansion of political and economic relations.

He noted that energy, shipping, medicine and tourism are among grounds for cooperation between the two countries.

For his part, the Greek diplomat said the European country is ready for various procedures for boosting trade interaction with Iran, Tasnim reported.

While in Tehran, Tsipras signed three memorandums of understanding (MoUs), including a document for boosting political consultations between the two countries’ foreign ministries, an agreement to abolish visa requirements for holders of diplomatic and official passports and a roadmap agreement to develop Tehran-Athens cooperation.