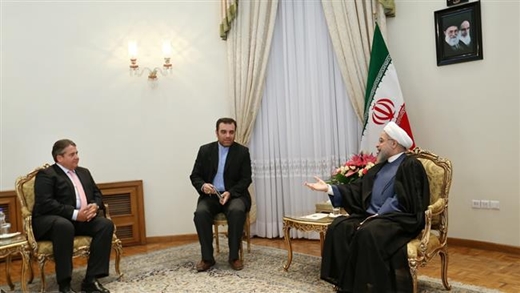 President Rouhani expressed hope that the German delegation plays a positive role in the expansion of Iran’s ties with Europe.

Rouhani made the remarks in a Monday meeting with German Economy and Energy Minister Sigmar Gabriel, who is heading a high-ranking delegation in a three-day visit to Iran.

“We hope that the German delegation plays its positive role in the expansion of Iran’s ties with Europe as it did so during [Iran’s nuclear] negotiations” with P5+1, the Iranian president said.

Rouhani stressed the importance of taking confidence-building measures to fulfill commitments envisaged in the conclusion of the nuclear negotiations in the Austrian capital Vienna, saying enhanced trade and economic ties between Iran and the six world powers is a means to guarantee the implementation of the accord.

Iran will remain committed to its undertakings if the opposite side does so, Rouhani said, emphasizing that the proper implementation of the agreement would be beneficial to all.

He further said that Iran and Germany should improve economic, cultural and political relations.

Iran and P5+1– the United States, Britain, France, China and Russia plus Germany – succeeded in finalizing the text of an agreement, dubbed the Joint Comprehensive Plan of Action (JCPOA), in Vienna on July 14 after 18 days of intense negotiations and all-nighters that capped around 23 months of talks between Iran and the six world powers.

Germany’s keenness to return to Iran

Gabriel, who is also Germany’s vice chancellor, said German tradesmen are keen to return to Iran and cooperate with their Iranian partners.

He welcomed the Vienna nuclear agreement which Germany regards as a new starting point for Tehran-Berlin ties and for relations between Iran and European countries.

The German delegation arrived in Tehran on Sunday to hold high-level economic and trade talks with senior Iranian officials.

Meanwhile, in a Monday meeting with the German economy minister in Tehran, Iranian Foreign Minister Mohammad Javad Zarif expressed hope that Tehran and Berlin would take steps toward bolstering relations in various fields.

Referring to the latest developments in the Middle East, Zarif said terrorism and extremism are among “the most serious” threats to regional states.

“The Islamic Republic of Iran, as a stable and powerful country in the region, is ready to counter these threats,” Zarif added.

Gabriel, for his part, urged the expansion of Tehran-Berlin cooperation, particularly in the field of economy.