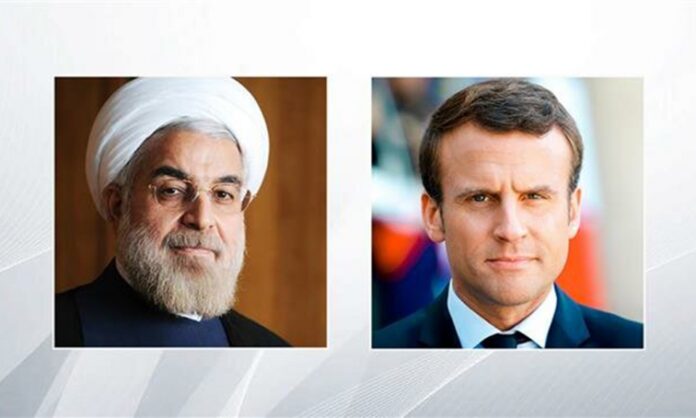 Presidents of Iran and France have emphasized the necessity for the security and freedom of shipping through the regional waters south of Iran.

In a telephone conversation on Tuesday evening, Iranian President Hassan Rouhani and his French counterpart Emmanuel Macron discussed a range of issues, from the 2015 nuclear deal to the collective efforts for de-escalation of regional tensions.

“Sadly, while Iran and France are trying to reduce the tensions and pave the way for sustainable coexistence in the region, we are witnessing provocative measures by the Americans,” President Rouhani said in the telephone conversation.

Iran emphasizes the need for the security and freedom of shipping in the region and the Strait of Hormuz, the president underlined, noting, “Everyday, tens of vessels travel (through the Hormuz Strait) freely, and Iran’s forces do their monitoring job according to the regulations.”

President Rouhani also described as “positive and a step forward” the negotiations that have been held in recent months to salvage the 2015 Iran nuclear deal, reiterating that Iran has reduced certain commitments to the JCPOA in order to secure its interests under the nuclear deal and force the other parties to honor their commitments and solidify the agreement.

The Iranian president then stressed the need for the efforts to expedite the process of Iran’s oil and banking trade with the other nations, describing it as Tehran’s overriding economic right under the JCPOA.

He also called for continued efforts to weight up plans for achieving expert and fair solutions for the fulfillment of Iran’s economic interests.

“The promotion of interaction and cooperation between Iran and Europe could create a calm and assuring atmosphere for the region and the world, and France, as an old partner of Iran in the European Union, can play a constructive role in this regard,” President Rouhani added.

Macron, for his part, reaffirmed France’s commitment to the JCPOA, saying Paris believes it is important to achieve a result that would be agreed on by all parties and would fulfill Iran’s interests under the JCPOA.

The French leader also welcomed the Iranian president’s proposal for consultations between the Iranian and French experts and officials to reach suitable solutions to various regional and international problems, and called for the expansion of cooperation between Tehran and Paris.

The two presidents have held at least four telephone conversations in the past few weeks.

France was the first country to contact the Islamic Republic following Tehran’s May 8 decision to reduce some of its JCPOA commitments in reaction to the US withdrawal from the deal and Europe’s failure to live up to its commitments under the deal.

There were talks of a plan shared with Iran by President Macron, known as “freeze for freeze”, based on which Iran would stop its nuclear decision and the US would lift its nuclear-related sanctions against Iran. However, Iranian officials did not explicitly confirm receiving such an offer.