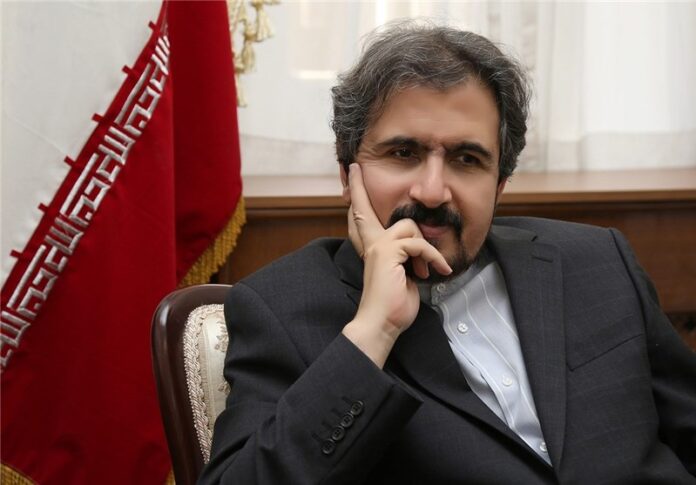 As French Foreign Minister Jean-Marc Ayrault was in Tehran for high-level political and economic talks, Iran’s foreign ministry spokesman in an article urged the two countries to minimise the impact of political challenges on their bilateral economic relations.

In a Farsi article published on the Foreign Ministry’s official website on Wednesday, the final day of French FM’s two-day visit to Iran, Iranian Foreign Ministry Spokesman Bahram Qassemi weighed in on the legacy of the 1979 Islamic Revolution in Iran as well as Tehran-France relations.

Thirty-eight years ago, the late founder of the Islamic Republic Imam Khomeini left Neauphle-le-Château in France for Tehran to lead a revolution which, today, is a key element of power in the region.

Incontrovertibly, Imam Khomeini’s short stay in Neauphle-le-Château and the role played by the French mass media in reflecting his revolutionary stances coupled with the supportive opinion of the French public who compared the 1979 Islamic Revolution with the French Revolution in 1789 all contributed heavily to the victory of the Iranian revolution. Iranian people mark the triumph of the revolution every year by remembering this contribution as well as their memories of the time.

Challenges such as the Iraqi imposed war on Iran in the 1980s, the issue of Salman Rushdie (who wrote the blasphemous book The Satanic Verses), the Mykonos issue and Iran’s nuclear dossier have been dark points in Tehran-Paris relations ever since.

Nevertheless, France’s deterrent role and its opposition to US sanctions against Iran in the D’Amato affair in 1996 as well as growing ties between Tehran and Paris during two former Iranian administrations are considered positive points in reciprocal ties since the 1979 Iran’s Islamic Revolution.

Despite all the ups and downs in Iran-France ties after the Revolution, the two sides have never doubted one issue: the necessity and significance of closer reciprocal ties to help boost the political and economic power of both sides on the one hand and resolve regional challenges and crises on the other. The presence of French officials together with political and economic delegations in Iran along with Iranian President Hassan Rouhani’s visit to France after the conclusion of the JCPOA [nuclear deal] all bear witness to the great importance of mutual relations for both sides.

Such importance is due to the influential status of Iran in the region and across the world.

France’s political power and modern industry have turned the country into a political and economic heavyweight in the world and a driving force behind the European Union. On the other hand, Iran’s geopolitical situation, rich natural resources, energy, and high manoeuvrability as a regional player have all stabilized Iran’s position as a key regional power.

The successful presence of major French companies such as Renault, Peugeot and Total in Iran indicates both countries enjoy great economic potential for joint ventures and shows the two countries are on course to forge closer cooperation in economic and trade arenas.

More importantly, Iran and France now are facing common threats such as ISIS, terrorism and extremism as well as regional crises which jeopardize both nations’ national interests and security. This has opened up a new opportunity for closer political and security cooperation in the region.

Therefore, given the whole raft of challenges and threats endangering peace, security, solidarity and unity both in the region and across the globe, Iran and France should seize the opportunity created in the wake of the conclusion of the JCPOA in order to boost cooperation and get a golden era of economic and regional collaboration to unfold. Since the Islamic Revolution, Tehran-Paris relations have been marked by economic opportunities and political restrictions.

In light of experience, this chequered past shows the two sides can chip away at their political challenges and focus their attention on their common ground in the political-security arena and not allow their political differences to affect mutual economic ties. By doing this, they can move towards establishing a lasting relationship in all areas and forming a strategic partnership.

It seems Iran and France as well as Iran and other European countries should draw a line between political and economic issues and minimise the effects of political challenges on economy, and instead, use promotion of economic ties as a tool to boost political relations in a bid to secure a lasting relationship.