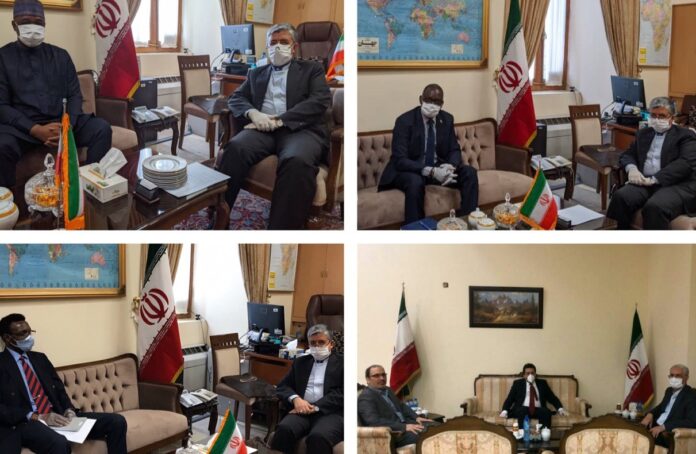 Deputies of the Iranian Minister of Foreign Affairs have held several meetings with the foreign diplomats residing in Tehran to submit the letters that Foreign Minister Mohammad Javad Zarif has written to his foreign counterparts about the US sanctions impeding the supply of health and medical products.

The Iranian Foreign Minister’s deputies for the affairs of various regions held separate and multiple meetings with the ambassadors and heads of the foreign missions residing in Iran, expounded on the latest status of the fight against the coronavirus epidemic, mentioned the problems and obstacles that the unilateral sanctions imposed by the United States of America have posed to the supply of the necessary health and medical products, and handed over the letters from the Iranian Minister of Foreign Affairs for his counterparts in different countries to the heads of foreign missions resident in Tehran for submission to the Foreign Ministers.

The contents of the letter were identical to the letter that Foreign Minister Zarif has written to Secretary-General of the United Nations Antonio Guterres on Saturday, March 14, 2020.
In the meetings, it was emphasized that the unilateral and illegal sanctions imposed by the United States against the Islamic Republic of Iran are the main obstacle to the effective and inclusive fight against the coronavirus outbreak, and it was underlined that the international community must not recognize and implement those unlawful sanctions.

In the letters to Secretary-General of the United Nations and to his foreign counterpart, Foreign Minister Zarif has emphasized that despite Iran’s scientific capabilities and the commitment that the country’s health system has shown to the fight against the coronavirus outbreak, the US’ sanctions have affected the legal trade of the sale of medicine, medical equipment and humanitarian supplies and have posed serious obstacles to the efforts to battle against the COVID-19 outbreak in Iran.

The Foreign Minister has also cited examples of the US’ measures against Iran, pointing to the effect of the US sanctions on Iran’s oil sales as well as the exports of other products by the country’s state-run and non-governmental sectors and a consequent reduction in the country’s incomes and in the ability of the government to provide subsidy for the basic commodities consumed by the Iranian citizens, the private sector’s reduced capacity for production and employment, the multilayered nature of sanctions on the financial sectors, transportation, insurance and banks for preventing the sale of medicine and medical equipment to Iran, the refusal to supply the Iranian airlines with the components, tools and even the navigation software, and the recent measure from the American companies to obstruct the use of information technology in preventing the spread of COVID-19.

Foreign Minister Zarif has also deplored the international community’s inaction in the face of the illegal measures of the government of the United States.

At the conclusion of the letter, Foreign Minister Zarif has stressed the necessity for an immediate end to the US government’s economic terrorism against people of Iran, has highlighted the duty of the United Nations and the Member States to support the Iranian people and government’s call for an end to the US government’s policy, and has asked the UN Secretary-General to have the text of the letter circulated as a document of the General Assembly and the Security Council.