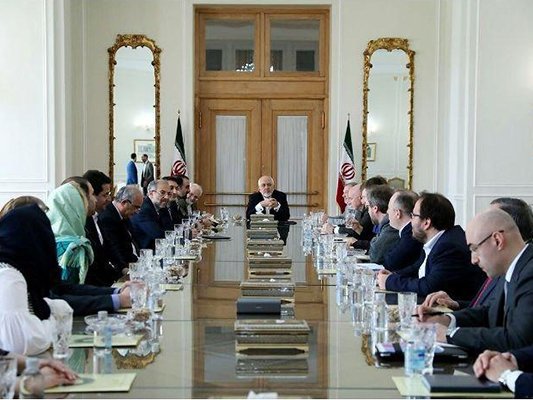 Iranian Foreign Minister Mohammad Javad Zarif has sat for talks with a group of academics and researchers from Russia’s Valdai Discussion Club in Tehran.

During the Sunday meeting, the two sides discussed the main regional and international developments especially the role of Iran and Russia at the international system and the future of the Iran nuclear deal, among others.

The Iranian foreign minister elaborated on his views about the situation of the current international system as well as the trends and players of today’s world and the prospects of regional and international developments.

He finally responded to the questions raised by some of the Russian academics and researchers.

Earlier in February, Zarif delivered a speech at the Valdai Discussion Club’s Middle East Conference. The annual conference was attended by prominent politicians, diplomats, scholars and public figures from more than 30 countries.

The main theme of this year’s conference was “Russia in the Middle East: Playing on All Fields.”

The conference, jointly held by the Valdai Club and the Institute of Oriental Studies of the Russian Academy of Sciences, included eight sessions dedicated to various Middle East-related issues, including Russia’s diplomatic, mediatory, and political role in the region as well as its perception by other parties.

In particular, experts discussed the post-war reconstruction of Syria, the prospects of settlement of the Palestinian-Israeli conflict and the situation in Yemen, the mechanisms of providing assistance to Libya and resolving the Kurdish issue, as well as the ways to reduce tensions in Iran’s relations with its neighbours.