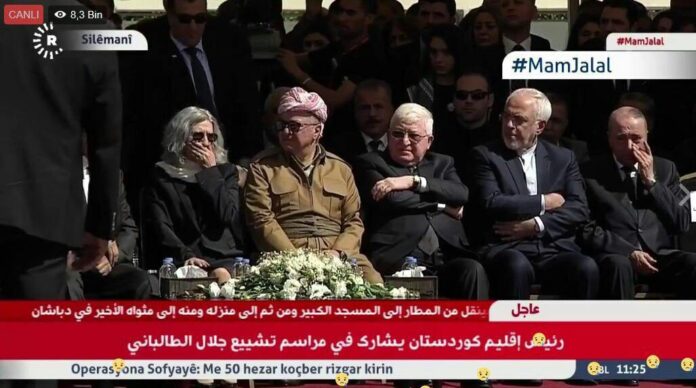 Zarif, as the first foreign dignitary attending the funeral service held on Friday for Talabani, offered a wreath to honour the late Iraqi president.

On the sidelines of the ceremony, Zarif once again stressed the importance of maintaining Iraq’s national unity and territorial integrity.

“The Islamic Republic of Iran is an all-time friend of Iraqi people, including the country’s Kurds, and does not regard the strategic mistakes made by certain individuals as those of Iraqi Kurds,” said Zarif.

The top Iranian diplomat expressed hope that everybody in Iraq’s Kurdistan woulf return to the path of Jalal Talabani, who, as Zarif said, was the symbol of Iraq’s unity and territorial integrity.

The foreign minister described late Talabani as a friend of Iran and an indefatigable fighter against the dictatorship of former Iraqi dictator Saddam Hussein.

Zarif referred to Talabani as a person who always made efforts to secure Iraq’s unity and territorial integrity. The foreign minister also paid tribute to the late politician.