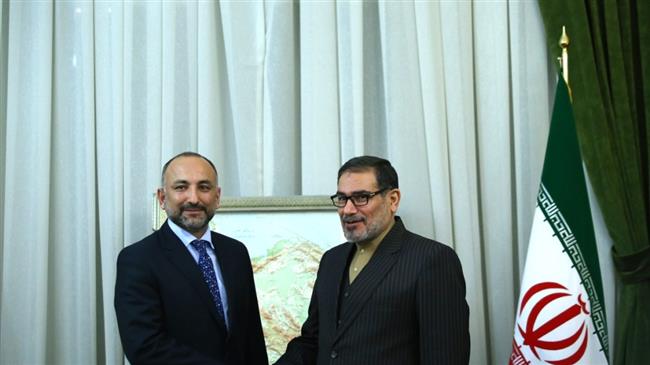 A senior Iranian official has underlined the need for extensive and strategic cooperation between Iran and Afghanistan and the continuation of security consultations between the two countries.

Secretary of Iran’s Supreme National Security Council Ali Shamkhani made the remarks in a Monday meeting with Afghan National Security Adviser Hanif Atmar in Tehran, where the Iranian official underscored the achievement of lasting solutions for the establishment of security along the joint border of the two countries.

Shamkhani pointed to the historical and cultural commonalities between Iran and Afghanistan as the main deterrent factor in the face of the divisive policies of the enemies of both countries.

Elsewhere in his remarks, Shamkhani said that the withdrawal of NATO troops from Afghanistan would serve as a suitable opportunity for the country’s army and security forces to prove their capabilities in defending national interests and countering terrorism.

The Iranian official said that the spread of insecurity and terror has been a long-time policy of certain powers to undermine the national capacities and regional standing of Muslim countries to justify their military, economic and political interference.

“The era of using terrorism as a tool for meddling in the region and advancing colonialist objectives is over,” Shamkhani said.

The Afghan official, for his part, praised Iran’s active role in the development and progress of Afghanistan and Iran’s hosting of Afghan refugees during years of war and insecurity in the country.

He said that concerted efforts for political cohesion and an all-out campaign against extremism and terrorism along with the expansion of cooperation, especially with the neighbors, are the priorities of the new Afghan government.