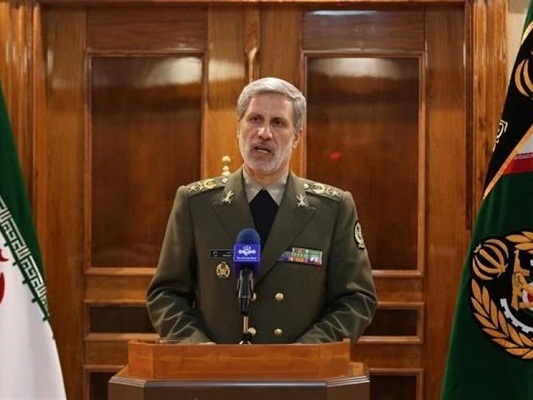 TEHRAN (Tasnim) – Iranian Defense Minister Brigadier General Amir Hatami dismissed as “baseless” US Ambassador to the UN Nikki Haley’s renewed claim that a missile fired by Yemen toward Saudi Arabia on Tuesday had been provided by the Islamic Republic.

Speaking at a meeting of commanders of the Iranian Army in Tehran on Wednesday, Brigadier General Hatami denounced “unfounded and baseless allegations” levelled against Iran by Haley and said such claims are indicative of the failure of Washington’s policies in the region and the world.

Such remarks are more like “a ridiculous and worthless show”, the defense minister said.

He further made assurances that the Islamic Republic would take necessary steps to pursue the issue through legal channels.

Addressing a meeting of the UN Security Council on Tuesday, Haley said the missile fired by Yemen’s Houthi movement toward Saudi Arabia on Tuesday “bears all the hallmarks of previous attacks using Iranian-provided weapons” as she pushed the council to act.

She urged the Security Council to punish Iran for what the Trump administration calls its “dangerous violations” of UN resolutions and “destabilizing behavior,” while Russia said dialogue is needed rather than threats or sanctions.

During a press conference on Thursday, Haley appeared standing before parts of a ballistic missile that she claimed Iran delivered to Houthis in Yemen, who then fired it at the Riyadh airport in Saudi Arabia last month.

Iran’s Ambassador to the UN Gholam Ali Khoshroo rejected Haley’s claim as “baseless” and said the accusations are aimed at covering up the Saudi war crimes in Yemen with the US complicity.

Yemen’s defenseless people have been under massive attacks by a coalition led by the Saudi regime for nearly three years but Riyadh has reached none of its objectives in Yemen so far.