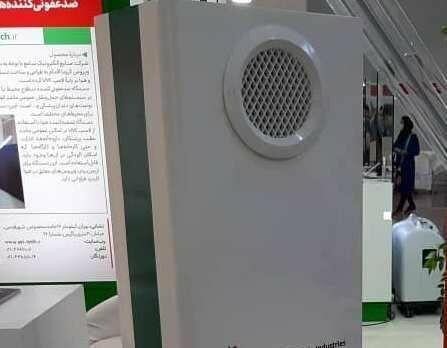 An Iranian knowledge-based company says it has developed an air handling unit capable of taking out the novel coronavirus.

The air handler has hit the shelves and could prove very useful at a time of coronavirus outbeak, the company says.

“In designing and producing this apparatus, we use nano, HEPA and carbon filters in order to remove particulates in, and the bad smell of the air,” said a top manager at the company which has developed the product.

“Using the existing filters will cause negative ions which should be produced to link to positive ions in the air and, as a result, clean the air of particulates,” he added.

“In addition to conventional filters, two UVC lamps have also been used in this device. A space has been designed, so that when air is sucked into the apparatus, it is circulated around these lamps, which, in turn, will take out the coronavirus in the air under the influence of the UVC lamps,” he noted.

He said the apparatus can be used in public places like banks, doctor’s offices, pharmacies and other locations where infected people are likely to enter, so that the air is purified constantly and any bacterial and viral contamination is removed.

The official said the device has been fully developed by local experts.

The performance of the apparatus has been approved through laboratory tests by the Iranian Standards Organization as well as the Food and Drug Organization, he noted.  He said bacterium and virus tests have also been conducted on the device, too.