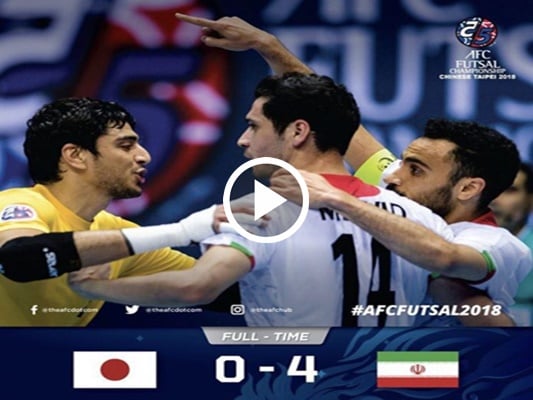 Iran deservingly claimed the title on Sunday after edging past Japan 4-0 in New Taipei City, the Chinese Taipei.

Two goals by Ali-Asghar Hassanzadeh and two others by Farhad Tavakoli and Hossein Tayyebi helped the Team Melli secure its 12th Asian title, adding another star to its already stellar national futsal record.

In the play-off match on Sunday, Uzbekistan managed to beat Iraq on penalties after a 4-4 draw, and claimed the third title at the 2018 AFC Futsal Championship, whose 15th edition opened on February 6.

Iran’s Tayyebi, who scored 14 goals during the tournament, was named the top goal scorer, and Hassanzadeh was selected as the Most Valuable Player (MVP).

Iran had earlier marched into the final showdown of the 2018 AFC Futsal Championship after it trounced Uzbekistan in a semi-final fixture. On Friday, the Persians defeated the Central Asians 7-1 in a match staged at the Xinzhuang Gymnasium in New Taipei City.

The AFC Futsal Championship is the premier national futsal competition of the Asian Football Confederation nations. It was first held in 1999 and was played annually until 2008; since then it has been played biennially.

Iran and Japan are the dominant nations being the only two nations to have won the tournament and Iran is the only nation never finishing outside the top four.

Iran, champions of 12 of the 15 editions of the competition, won 7 straight editions before their streak was broken by Japan.

Japan have won the other 3 editions of the competition.