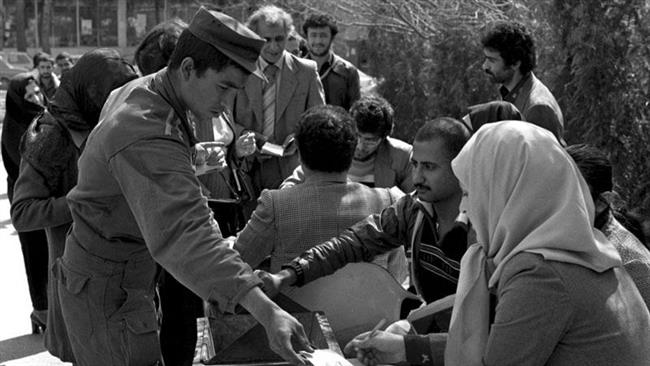 Iran is marking the 37th anniversary of a referendum in which Iranians overwhelmingly voted for the establishment of the Islamic Republic following the fall of the US-backed Pahlavi regime.

In a landmark two-day referendum held on March 30-31, 1979, more than 98.2 percent of eligible Iranians voted “yes” to the establishment of an Islamic republic in the country.

It came as the popular motto marking the days after the 1979 Islamic Revolution was “Independence, Freedom and the Islamic Republic” on every corner.

Since then, the nation annually celebrates Farvardin 12 on the Iranian calendar year as the Islamic Republic Day.

The Islamic Revolution, led by late Imam Khomeini, culminated in the overthrow of Mohammad Reza Pahlavi and put an end to 2,500 years of monarchic rule in Iran.

Addressing a Wednesday cabinet meeting in Tehran, President Hassan Rouhani praised the Islamic Republic Day as the day of the realization of democracy and Islamic values.

He added that the late Imam Khomeini proposed a referendum on the establishment of an Islamic system in Iran less than two months after the triumph of the Islamic Revolution.

“Democracy and Islam have materialized in the country in the real sense where the victory of the revolution has provided for the people to comfortably go to the polls and cast their ballots,” Rouhani said.

“We must employ all our energies to safeguard the Islamic Republic of Iran and strive on the path of the country’s development and progress,” he added.