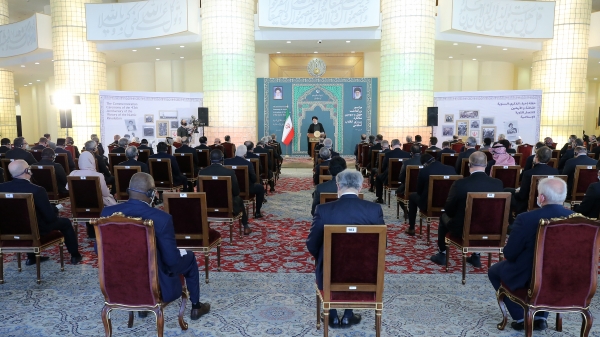 Rarisi was addressing a group of foreign ambassadors on the occasion of the 43rd anniversary of the victory of the Islamic Revolution.

He said the Iranian people staged a revolution to decide their own fate, adding that the cause and values of the Islamic Revolution were universal and any rejection of them is tantamount to rejection of human and ethical values.

Raisi also noted that the Islamic Revolution was the product of the Iranian people’s deep faith in Islam’s lofty principles and values as well as the struggle for justice and freedom.

The unique feature of our great Imam is that he was able to create a new identity called the Islamic Republic or religious democracy in the turbulent world of politics and in the region and the world, the president said.

Raisi described comprehensiveness, dynamism and intelligence as the characteristics of the foreign policy of the Islamic Republic.

He said, “We are trying to create a new chapter of bilateral or multilateral cooperation in diplomacy in order to maintain regional and extra-regional security and to meet mutual needs.”

Raisi said to this end, Iran has implemented an important part of the 25-year strategic partnership agreement with China and it’s seeking a similar agreement with Russia.

The president added that Tehran has also taken effective steps to improve relations with all neighbors and by strengthening ports and transit corridors, it’s paved the way for the development of cooperation with neighbors.