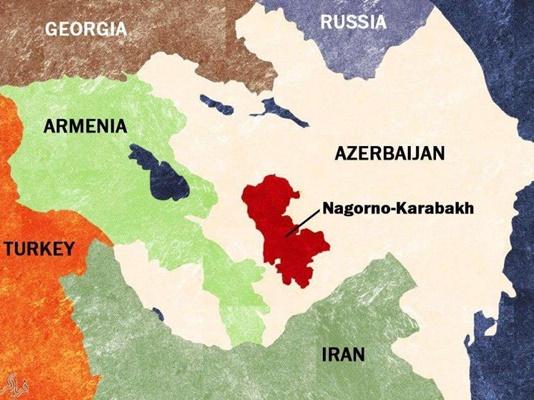 A former Iranian diplomat says Tehran can play a role in settling differences between Yerevan and Baku.

Armenia is of significance to Iran as it has no common trade borders with countries around it other than Iran and Georgia. So, Armenia is very beneficial to Iran trade-wise.

Among other issues discussed by Iran and Armenia in recent years is the issue of Karabakh and differences between Yerevan and Baku. To discuss that further, the Persian-language Khabar Online news agency has conducted an interview with former Iranian Ambassador to the Azerbaijan Republic Afshar Soleimani.

The full text of the interview conducted follows.

Explain to us the reason behind Dr. Zarif’s trip to Armenia.

Our foreign minister’s trip to Armenia came at the invitation of his opposite number Edward Nalbandian. Zarif made the trip leading a political-economic delegation. During the trip, Zarif not only met his Armenian counterpart, but sat down with the Armenian president as well. A joint economic meeting was also set up by the two countries.

Armenia, a Christian neighbour, is of significance to Iran in the South Caucasus. The foreign ministers of both countries make mutual trips to the other country on a regular basis to review the enhancement of relations and identify and remove obstacles to the promotion of reciprocal ties.

As Armenia has no territorial and political relations with the Azerbaijan Republic and Turkey, and it only has open borders with Iran and Georgia, Yerevan pays due regard to its relations with Iran, especially when the Islamic Republic meets a great part of Armenia’s needs for natural gas and food as well as industrial and petrochemical products.

How do you evaluate the strong and weak points of the two countries? In your opinion, can Iran’s diplomatic apparatus settle the differences between Baku and Yerevan?

The two countries have constructive cooperation with one another in international organizations and circles, and defend each other’s rights. Given that 20% of Azerbaijan Republic’s territory is occupied by Armenia, and with regard to the circumstances surrounding Tehran-Yerevan ties, Tehran-Baku relations have always been impacted by Tehran-Yerevan relations. So, the Iranian diplomacy apparatus should try its best to urge Armenia to pull out of the Azerbaijan Republic’s occupied territories in conformity with UN Security Council resolutions and play an effective role in settling the Karabakh issue.

Can we say that part of the trip is related to the European Union’s demand regarding the nuclear power plant in Armenia?

Given that the Metsamor nuclear power plant in Armenia is dangerous, and that waste material from aluminum and copper factories in the country go into the Aras River, the Iranian foreign minister should have held meetings with Armenian officials during his trip in line with the closure of the Metsamor atomic facility as demanded by the EU as well. Also, Zarif should have talked Armenian authorities into preventing waste material from pouring into the Aras River, which creates environmental problems and jeopardizes the people living around the river.

Our ambassador to Armenia has told ISNA that the extent of Tehran-Yerevan relations is not satisfying. What does that mean? Will it harm mutual ties?

Armenia is mostly influenced by Russia, and the Russians have established a military base in Armenia’s Gyumri, and the country’s energy is under Moscow’s sway. That is why the Russians did not allow Iran’s natural gas pipeline to be linked to Georgia via Armenia. Moreover, Armenia’s borders with its neighbours are controlled by Russian troops. So, Armenia’s foreign relations are affected by its ties with Russia. As a result, Iran should hold the necessary consultations with Russia for regional cooperation in the Caucasus and bilateral relations with the countries there.

It seems Zarif must have also discussed bilateral issues as well as key regional and international developments with Armenian officials during his trip, and must have informed Armenian authorities of the latest situation of the Iran nuclear deal and Washington’s breach of promises.

As an Armenian lobby exists in the US and France, the Iranian foreign minister must have considered talks on how to make the most of this lobby in line with Iran’s national interests.