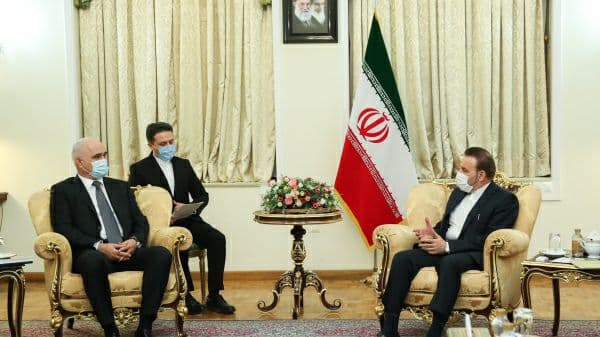 Chief of Staff of the Iranian President’s Office Mahmoud Vaezi and First Deputy Prime Minister of the Republic of Azerbaijan Shahin Mustafayev have stressed the need to broaden economic and trade ties between the two neighbours and expedite the implementation of the previous agreements.

In a Monday meeting held after the 14th meeting of the Joint Commission on Iran-Azerbaijan Economic Cooperation, Vaezi hailed the growing relations between the two Muslim neighbours, saying 13 presidential meetings indicate the two countries’ determination to boost relations.

He also noted that the economic and trade interaction between Tehran and Baku have grown constantly despite the outbreak of the coronavirus pandemic, pointing to more than 100 reciprocal meetings between diplomatic delegations at the level of ministers and signing of over 40 cooperation agreements.

Vaezi also unveiled plans to finalize a preferential trade agreement between Tehran and Baku within the next month, emphasized the necessity for reconstruction of the Azeri territories liberated recently after the Nagorno-Karabakh war, and noted that the Iranian companies can participate in the reconstruction process.

For his part, the Azeri deputy prime minister praised Iran’s stances on the Nagorno-Karabakh dispute and its support for the territorial integrity of Azerbaijan, calling for the promotion of economic and trade ties with the friendly neighbor, Iran.

Mustafayev said he has attended the latest round of the Economic Cooperation Joint Commission with a 14-strong delegation within the framework of seven specialized committees on cooperation in various fields, noting that good decisions have been made in the meetings.

He further dismissed rumours that the Azerbaijan- Nakhchivan railway would ignore Iran’s interests, stressing that the new rail route will serve the interests of Iran, the Republic of Azerbaijan, Armenia, Russia, Turkey and Georgia, as the six countries will be able to expand trade cooperation.