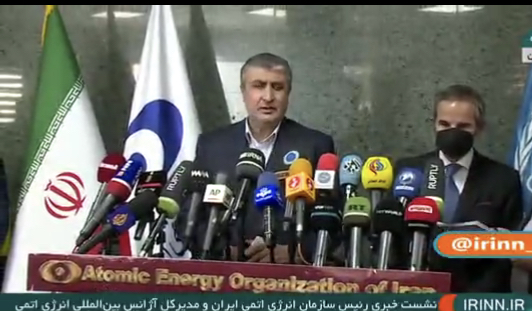 Iran's atomic chief says the head of the International Atomic Energy Agency has told him during their meeting that the IAEA has found no diversion in the Islamic Republic's nuclear program.

“Grossi stated several times in talks today that he has not seen any diversion in Iran’s nuclear program, and that Iran’s nuclear activities are ongoing based on treaties,” Mohammad Eslami said in a joint press conference with IAEA chief Rafael Grossi in Tehran after their talks on Tuesday .

Eslami said the important point is that all issues between Iran and the IAEA are technical, and the international agency’s work will not be affected by political issues, and the conspiracies of Iran’s enemies.

Eslami clarified that Iran has answered the agency’s questions about certain documents which were provided to the IAEA by the enemies and that the case of some of these documents has now been closed and the two sides will address the outstanding cases.

The Iranian nuclear chief noted that Iran is determined to advance its nuclear program adding Tehran and the IAEA have agreed that the agency would assist Iran in nuclear matters related to the lives of the people.

Grossi said during the press conference that Tehran and the IAEA are working together on transparency and will continue doing so.

Today’s talks and work were intensive and we want to find common grounds, he added.