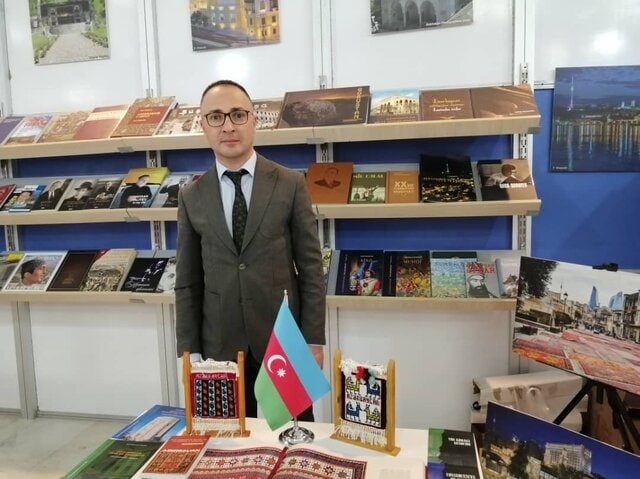 The head of the Republic of Azerbaijan’s booth at the Tehran Book Fair has spoken about the place of Iranian literature in his country and described Nezami Ganjavi as a poet for the whole world.

From Iranian literature in Azerbaijan to the challenge about Nezami

In an interview with the Iranian Students News Agency (ISNA), President of the Baku Book Fair Akef Ma’arefli spoke about participation in the 33rd international book exhibition in the Iranian capital.

He said last year, an Iranian delegation took part in the Azeri book fair, and the two sides agreed to provide the presidents of the booths of the two countries with an 18 square meter free space.

He added, “Now we are here to draw up a contract in writing”.

He went on to say that culture brings countries closer together, and books are the foundation of culture. “If relations between countries are predicated on culture and books”, Ma’arefli said, “we can assert that the relations are genuine and deep”.

“That is the reason why we participate in the book fairs, both the Azerbaijan Book Fair and the Tehran International Book Fair”, he added.

The president of the Baku Book Fair added that he passed Persian language and literature in university and that he could read and write Persian.

He reiterated that Iran and the Iranian culture are loved by Azeris. “I think our literature and writers, Nezami Ganjavai and Mohammad Fezuli, are also studied anxiously in Iran”, Ma’arefli said.

Was Nezami Iranian or Azeri?

Asked about a difference between Iran and Azerbaijan over Nezami and whether he was Iranian or Azeri, the president of the Baku Book Fair said, “Nezami Ganjavi belongs to the whole world”.

He referred to Nezami’s suffix family name, that is, Ganjavi, saying it’s obvious the poet was born in Ganjeh and lived and died there. Ma’arefli added that this “great poet” had been in Ganjeh for 68 years and went nowhere from there.

“Ganjavi is a poet for all of us; Azerbaijan, Iran, the US, Russia and the Turks, but he is known in the world as the great poet of Azerbaijan”, he claimed.

The president of the Baku Book Fair said in the past, Persian was the language of poetry and literature in Azerbaijan, and poets composed in Persian with love and passion.

He maintained that the Persian language at that time provided Azerbaijani poets with a great opportunity.

Ma’arefli added that it doesn’t matter much in what language Nezami composed his poems but what is important is that he is loved in the world and his poems are read all over the world.

How does Azerbaijan participate in the Tehran Book Fair?

The president of the Baku Book Fair then explained how they participated in the Tehran Book Fair. Ma’arefli said the books they have brought to the exhibition are mostly cultural and are on Azerbaijanology.

He described Iran and Azerbaijan as two friendly and brotherly countries. Ma’arefli added that last year, most books Iranians had brought to the Baku Book fair were on the Persian culture.

The president of the Baku Book Fair also said works of Sa’adi and Hafez have been translated in Azerbaijan and taught in schools and universities there.

“We have all types of Iranian books in Azerbaijan”, Ma’arefli added.