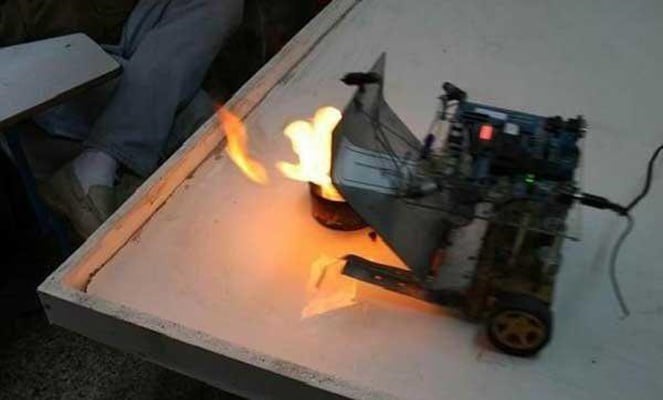 A group of Iranian scientists have invented a robot that can extinguish fires of up to 1000 Celsius degrees while it is engulfed in flames.

Researchers at the Mechatronics Research Centre of Qazvin Azad University have designed a robotic firefighter that can put out fires of between 700 to 1000 degrees Celsius.

In a Farsi interview with ISNA, Mohammad Moshfeqi, the executor of the project, says the tragic fire incident at Plasco building in Tehran made the team think about designing such a robot one and a half years ago.

The Plasco Building was a 17-story high-rise landmark building in Tehran, the capital city of Iran. The building collapsed on 19 January 2017 during a skyscraper fire. At the time of the fire, the Plasco building was used as a commercial building, with a major shopping centre on its ground floor, and many clothing workshops.

“The robot is made to approach and enter the ablaze environments as its body is double-surfaced and designed in such a way that the cool water rotates inside it,” Moshfeqi added.

He further mentioned that all the accessories of the robot are placed inside a box that fire, heat or smoke cannot affect it.

Speaking about the performance of the robot, he noted that when the fire hose is connected to the robot, it gets into the areas that a human cannot, and puts out the fire from inside.

“In general, there are 19 major hazards for firefighters that this robot is capable of dealing with. For example, a firefighter in special clothes can tolerate the heat only a few minutes, but this robot has no limits to stay in fire.”

According to him, due to the use of metals, silicon and carbon fibres, this robot can stay in flames longer.

Stressing that its water canon is of a 360-degree flexibility, Moshfeqi said that such a robot is designed for fire incidents in the cities.

“Among the other advantages of this robotic firefighter is its ability of crossing non-smooth surfaces and stairs.”

He also noted that if the robot’s connection with the operator is interrupted, it can return to its original position while it can report its temperature to the operator.

According to this researcher, the cost of making this robot is one-third of the cost of insurance for a firefighter.