Iran has a very rich history with which the Indians can connect very well, said the Indian envoy to Iran in an exclusive interview, highlighting the cultural and historical ties between the two nations.

Indian Ambassador to Iran Saurabh Kumar recently commented on the level of cultural cooperation between Iran and India as well as the two sides’ tourist exchanges, joint historical background and cinema.

He made the remarks in an exclusive interview with IFP on the sidelines of a ceremony to celebrate the 67th anniversary of the ‘Republic Day of India’ in the Iranian capital of Tehran last week.

Q: How do you evaluate the level of cultural cooperation between the two countries? Are there any joint cultural plans underway by the two sides?

A: I have put a great deal of emphasis on expanding cultural collaboration between the two sides. Inviting cultural troupes from India is an example of efforts to this end. When Indian Prime Minister Narendra Modi was in Iran in May 2016, I invited the Indian top flutist, Hariprasad Chaurasia, who is considered a real maestro, to come to Iran and perform in Tehran’s most prestigious cultural venue Vahdat Hall. We also held a function in the same hall in which separate performances were staged. In 2016, the Indian Embassy organized two other performances in Vahdat Hall as well. 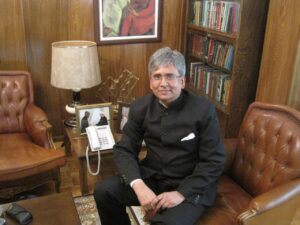 The Iranian Embassy in New Delhi is also doing a great deal in terms of exposing the Iranian culture to Indians. Some time ago, Iran held a cultural week in New Delhi. Iran and India are also holding seminars on their cultural heritage and the civilizational contacts they have had in each other’s countries.

Earlier this year, 2017, a major conference was organized in New Delhi which was attended by a number of Iranian visiting senior officials. The confab was inaugurated by Indian Vice-President Mohammad Hamid Ansari. We keep holding such cultural events and look forward to the increase of these interactions.

A: Persian language courses are very popular in India. A lot of Indian universities have Persian departments. I am told that we have a very rich collection of Persian books in India. Some say that the collection is even larger than what you have in Iran, but I am not very sure about that.

In addition, the first Farsi newspaper was published in India, Kolkata. There is also a very rich collection of Farsi manuscripts in India. We released a manuscript of ‘Kelileh-o Demneh’ (or Panchatantra) — an ancient collection of interrelated animal fables in verse and prose, arranged within a frame story — during the Indian prime minister’s visit to Iran. Languages are great binding factors. And a lot of Indian historical as well as cultural texts have been translated into Farsi.

Q: Nader Shah (1698–1747), one of the most powerful Iranian rulers, invaded the Mughal Empire, an empire in the Indian subcontinent, and defeated their army in less than three hours at the huge Battle of Karnal on February 13, 1739. He later, ordered his soldiers to plunder and sack Delhi. Does the incident still incite hatred among Indians against Iranians?

A: It is an interesting question. Once, on a trip to Mashhad, Khorasan Razavi Province, I was visiting the tomb of Nader Shah. During the visit, I noticed that the person who was showing me around was feeling a bit apologetic. First I was surprised but later I found out that he was feeling sorry for what Nader Shah had done.

History is history. We, Iran and India, look forward to our future relationship and talk of our present ties. Nader Shah was an incident. The two countries have had a very long history of civilizational contacts. Both sides’ leaders, including Jawaharlal Nehru, the first prime minister of India, have made very positive and flattering statements about the relationship between the two states and their people.

People in both countries feel the same about each other. Indians look upon Iranians as well as their culture, history and language in a very positive way. Iranians also have the same positive attitude towards India and its features.

On January 25, an Indian cultural troupe performed a violin concert in Tehran. During the performance, the hall was packed with the sentiment coming out from the musicians and the audience. In addition, the way the audience was responding carried a message in itself: How closely we [Iranians and Indians] feel for each other.

We teach about Nader Shah’s invasion in our history books, for it is a historical fact. But we also teach about the relationship and people-to-people contacts that the two countries have had through the ages. We talk about your princess marrying the Mughal rulers and all other historical facts. Farsi was the official language of India for several centuries. We talk about that too.

I am sure they would be. Indian tourists do travel to Iran although their number is currently small due to problems mostly pertaining to tour operators, the making of payments and direct flight connectivity.

Iran and India have the potential to have a more improved flight connectivity. I am very upbeat that in the future, a lot more Indian tourists would visit Iran. Iran has a very rich history with which the Indians can connect very well. Those Indian tourists who have visited your country have gone back highly rewarded by the sites they have seen.

Q: Do they feel any security concerns over visiting Iran?

A: Iran is such a safe place. I, personally, live here and know how safe it is.

Q: Have you watched the film, jointly produced by Iran and India, titled ‘Salaam Mumbai’ (Hello Mumbai)? Did you like it?

I look upon it as another positive step in the area of cultural cooperation between the two countries. Film industry is very important and big in India. We produce almost three movies a day. I have seen a number of wonderful Iranian movies too.

I very much liked the scenario of ‘Salaam Mumbai’. It was very pleasing to me to see Iranian and Indian artists have cooperated with each other to produce such a great movie on the very sweet theme of love. The film depicts improved people-to-people relations between India and Iran, what we, as the two sides’ officials, keep talking about and aiming for. The film also included several other realities pertaining to a lot of Iranians going to India for education purposes.

I think the production of the film was a very good initiative. I have been told that it has been very well received by the audience in Iran. I am sure it would also do well in India. I hope such initiatives would bring the countries closer.