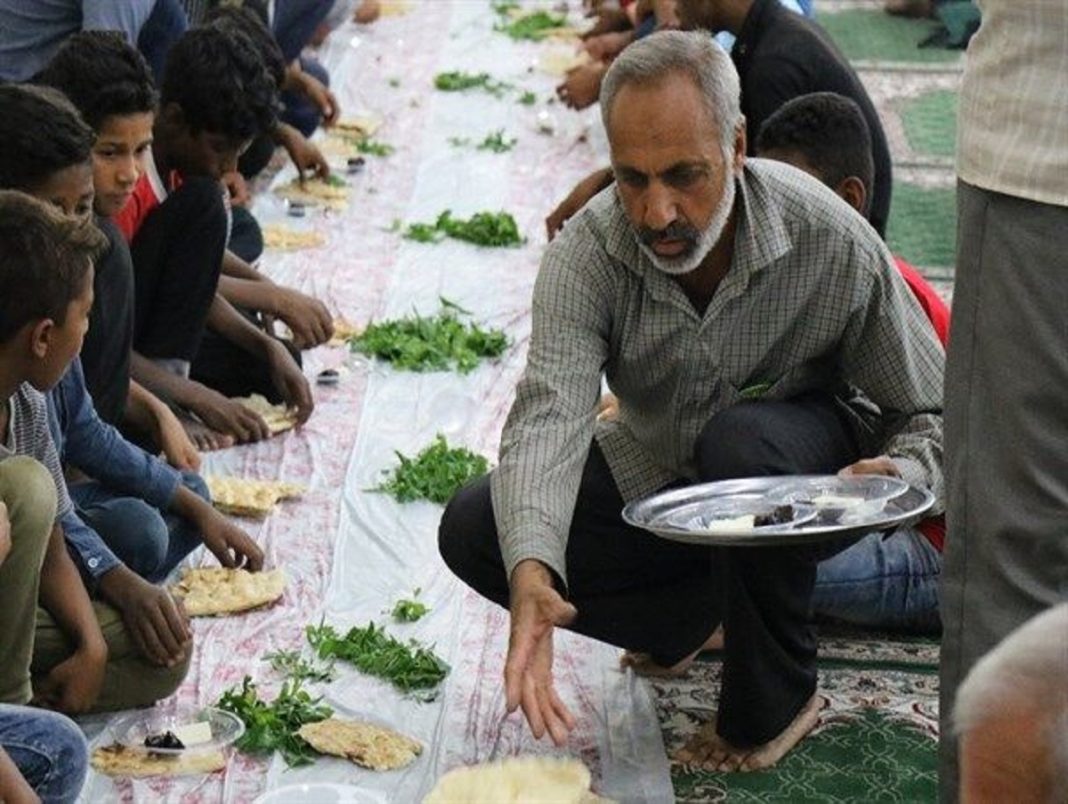 The people in Iran’s southern Hormozgan Province, like their other compatriots, have clung firmly to their religious rituals during the Muslim fasting month of Ramadan, during which they abstain from all food or drink from dawn to sunset, among other things.

They have developed their own traditions over the past centuries to best perform the religious duty of fasting.

In Hormozgan, like in any other part of the world, many traditions and rituals have undergone transformation or even faded away with the passage of time, but those of Ramadan continue to give a special face to the province’s east.

For years, the people of Hormozgan have been gloriously observing the holy fasting month in their own style, with some of the traditions being either rooted in the same land or passed down from one generation to another.

Recitation of hymns by the local mullah (clergyman)

In this tradition, an individual goes up to the roof of a house, mosque or a hussainiyah one hour before the mourning call to prayer and wakes people up by reciting hymns with a loud voice for them to have the meal before the dawn of the fasting day. This ritual, as a spiritual and intangible legacy of Hormozogan, used to be observed in suburban neighborhoods and villages until a few years ago, but it has lost its vigor due to a more common use of alarm clocks.

“The crowing of the cock” was yet another common way that was relied on to wake people up early in the morning for the meal before the start of the fasting day.

Breaking the fast with light meals

In the course of the holy month of Ramadan, residents of Hormozgan have the habit of breaking their fast with some warm water, salt, dates, tea, hot milk, Halva (a kind of sweet paste), Sooraq and Mahyaveh types of sauce with eggs, saffron cookies, Komaj bread, and Gerdeh sweet bread upon the evening call to prayer. This tradition was known as “mouth opening” in old times.

Still, some women can be seen, especially in the course of Ramadan, cooking local bread, such as Tomshi, with Sooraq, Mahyaveh, oil, and sometimes, eggs and cheese in parks, on the beachside, or in the crowded streets, while others sell Aash (pottage), hot Haleem, peas and broad beans.

Sharing the Iftar table with relatives

According to their long-running habits and beliefs, the people of Hormozgan share a portion of the food they have for Iftar with neighbors and relatives so that the food will bring more delight and blessings.

Honoring the memory of those lost

The people of Hormozgan, especially those in Minab, hold a procession of nine nights in memory of those who have passed away by reciting Qur’an and distributing food for Iftar. They usually invite between 50 to 100 relatives to the ceremony known as “the Eid of the Dead,” which is, in itself, a kind of family visit.

Joshan-e Kabir prayer, which in Hormozgan is known as “the 100-paragraph prayer,” is recited during the nights of Qadr (Destiny) in the month of Ramadan. According to ongoing ritual, the locals of Hormozgan carry thread or knitting yarn with themselves [to mosques where the prayer is recited] and they give one knot to the yarn with every paragraph of the prayer, and they believe that keeping that yarn on themselves or at home alleviates problems.

People in Hormozgan call Zakat al-Fitr “sar-roozeh.” In the evening of the last day of the holy month of Ramadan and before the evening call to prayers, they assign “sar-roozeh” to each member of the family and put it aside until they give it to the needy or the custodian of the local mosque on Eid al-Fitr.

On Eid al-Fitr, especially in Hormozgan, Minaab, family members get together and, distilling grievances, set up a big serving tablecloth to host worshipers. Then, they head to the graveyard to visit the dead and recite the Quran and prayers and congratulate them on the eid.

The holy month of Ramadan has many long-held rituals and traditions in Hormozgan and the Persian Gulf region, which has a high tribal, religious, and cultural diversity because of the presence of the many Iranian ethnicities who live there. That diversity is the reason why you would smell different tribal and local foods and appetizers as you pass neighborhoods when Ramadan begins.