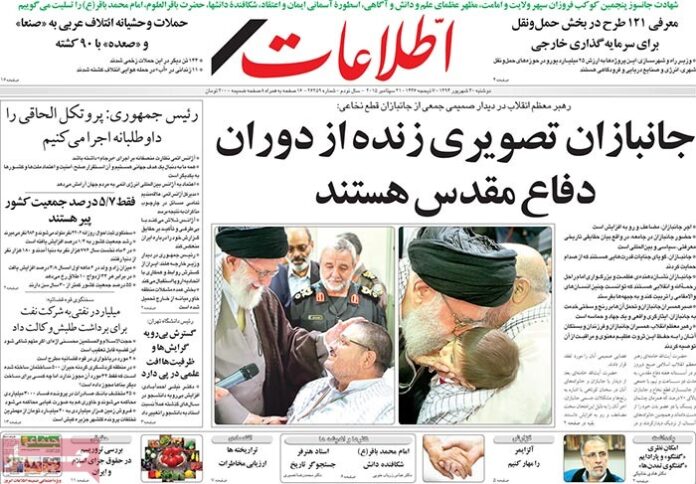 A special look at the headlines Ettela’at newspaper covered on September 21.

♦ “Disabled veterans are vivid images of the Sacred Defense era,” the Supreme Leader said at a meeting with a number of war veterans suffering from spinal cord injury.

♦ President Rouhani has said that Iran will voluntarily implement the Additional Protocol.

The president also called on the International Atomic Energy Agency to fairly supervise the implementation of the Joint Comprehensive Plan of Action.

The minister of roads and urban development said the urban transportation, energy, maritime industries and airport projects are worth €25 billion.

♦ Brutal attacks by the Saudi-led coalition on the Yemeni city of Sana’a and Saada have left 90 people killed.

More than 100 others were injured in the airstrikes.

♦ Old people account for only 5.7 percent of the country’s population.

♦ The judiciary spokesman has said that the oil billionaire has given the [National Iranian] Oil Company power of attorney to settle his debts.

♦ The president of the University of Tehran has said that unchecked growth of higher education programs and capacities results in a scientific decline.