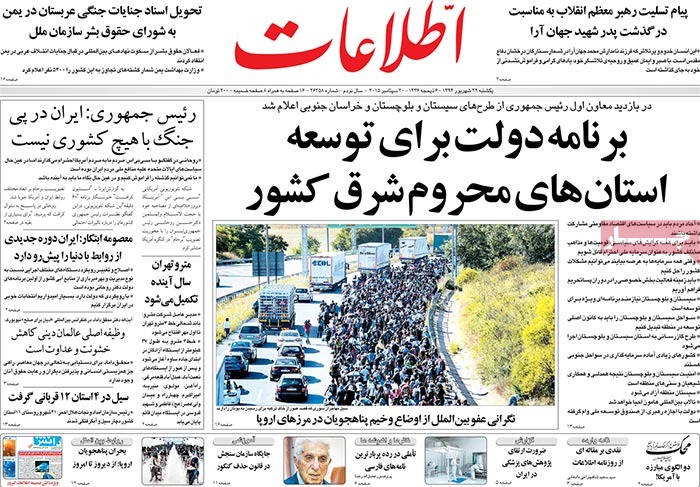 A special look at the headlines Ettela’at newspaper covered on September 20.

♦ The Supreme Leader has issued a message of condolences following the demise of Martyr Jahanara’s father.

♦ Amnesty International has expressed concern over the conditions of migrants on borders of Europe.

♦ Evidence on Saudi war crimes in Yemen has been presented to the Human Rights Council of the United Nations.

It came as the Yemeni Health Ministry put the number of Yemenis killed as a result of Saudi aggression at 5,400.

♦ President Rouhani has said that Iran does not seek war against any country.

In an interview with CBS’s Steve Croft, the Iranian president said that Iranians respect the American people, but had not forgotten the US policies against their national interests.

♦ “Iran has a new round of ties with other countries ahead,” said the director of the Environment Protection Organization.

A change in the approach of different executive institutions to management and use of water resources is among the primary environmental plans of the Rouhani administration, Dr. Masoumeh Ebtekar said.

♦ Tehran’s subway system will be complete next year.

♦ The primary responsibility of religious scholars is to make efforts to whittle down violence and hostility.

The comment was made by senior Iranian scholar Ayatollah Mohaghegh Damad in an international “Religions for Peace” conference in New York.