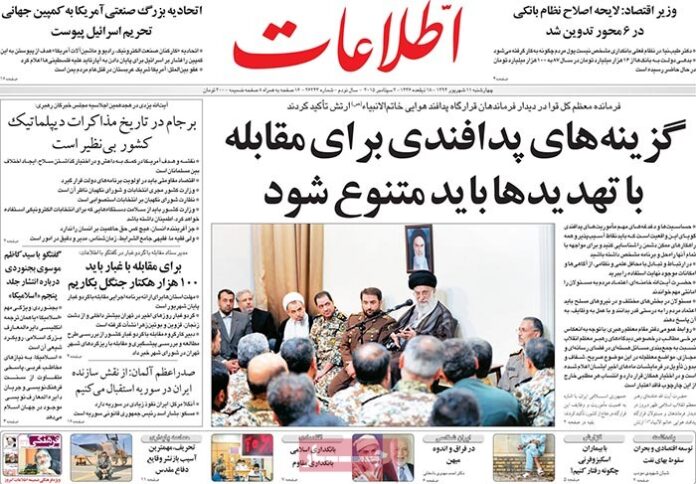 A special look at the headlines Ettela’at newspaper covered on September 2.

♦ “Defense options to counter threats should be diversified,” said the Supreme Leader at a meeting with senior officials of Khatamulanbia Air Defense Base.

♦ The economy minister has said that a 6-point bill to reform the banking system has been devised.

♦ A major industrial union in the US has joined an international campaign to boycott Israel.

The United Electrical, Radio and Machine Workers of America has said it wants Israel to end its anti-Palestinian apartheid.

♦ “The Joint Comprehensive Plan of Action is unprecedented in the history of Iran’s diplomatic talks,” the chairman of the Assembly of Experts said.

Ayatollah Mohammad Yazdi further said that US provision of arms to IS terrorists is designed to divide Muslims.

♦ To counter the negative impact of dust storms some 100,000 hectares of forests should be created.

♦ The German chancellor has said that Berlin welcome’s Iran’s constructive role in Syria.

The important feature of Islamica, which is the English translation of the Greater Islamic Encyclopedia, is its Shiite approach to Islamic questions.