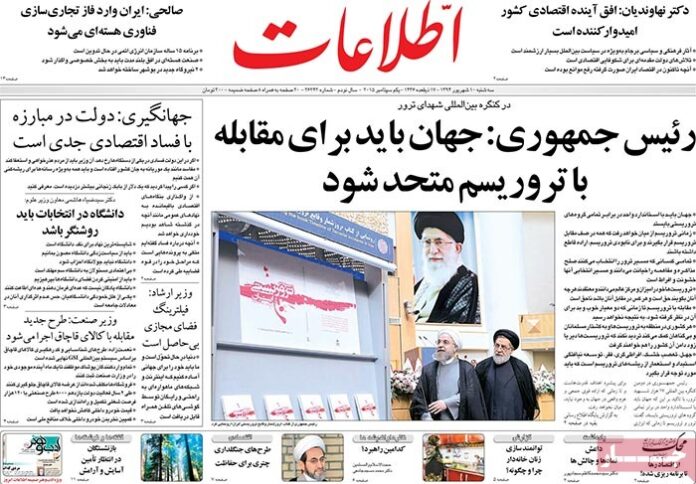 A special look at the headlines Ettela’at newspaper covered on September 1.

♦ President Rouhani has called on the world nations to form a united front in the fight against terrorism.

♦ The chief of staff of President Rouhani has described the economic prospects of the country as promising.

Mohammad Nahavandian hailed the cultural and political effects of the Iran nuclear deal, especially on the international political front, as valuable.

♦ The director of the Atomic Energy Organization has said that Iran will commercialize nuclear technology.

Ali Akbar Salehi said his organization is drawing up a 15-year development plan.

♦ First Vice-President Eshagh Jahangiri has said that the administration is serious in the fight against corruption.

Eshagh Jahangiri said that if there is corruption in a ministry, the minister should apologize to the public before tendering his resignation.

♦ “Universities should play an enlightening role in elections,” said the deputy science minister.

♦ The minister of culture and Islamic guidance has said that blocking Internet sites is useless.

Ali Jannati further said that the world is transforming fast and that officials should prepare themselves for a world in which Internet and satellite channels will be available free of charge on cell phones.

♦ The industry minister has said that a new plan to fight smuggling in goods will be implemented.

The new plan requires shops to stop selling items which are smuggled into the country.