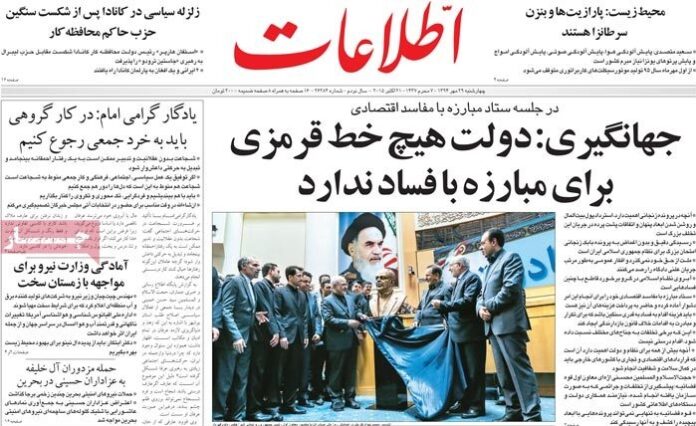 A special look at the headlines Ettela’at newspaper covered on October 21.

♦ “There are no government red lines in the fight against corruption,” the first vice-president told a meeting of the anti-corruption commission.

♦ The Environment Protection Organization has said that satellite signal jammers and benzene are carcinogenic.

A deputy director of the organization has said that production of motorcycles with carburetors will stop as of September 2016.

♦ The defeat of the ruling Conservative party in Canada, a political seismic shift.

In the same elections, two candidates of Iranian origin and one of Afghan descent won parliamentary seats.

♦ The grandson of the architect of the Islamic Republic has said that collective wisdom should be tapped in teamwork.

Seyyed Hassan Khomeini further said he’ll make a decision “in due time” on whether to run for the Assembly of Experts.

♦ The Energy Ministry is ready for a harsh winter.

The energy minister has urged water and electricity companies to brace for a bitterly cold winter.

The attack by the security forces left a few worshippers injured.