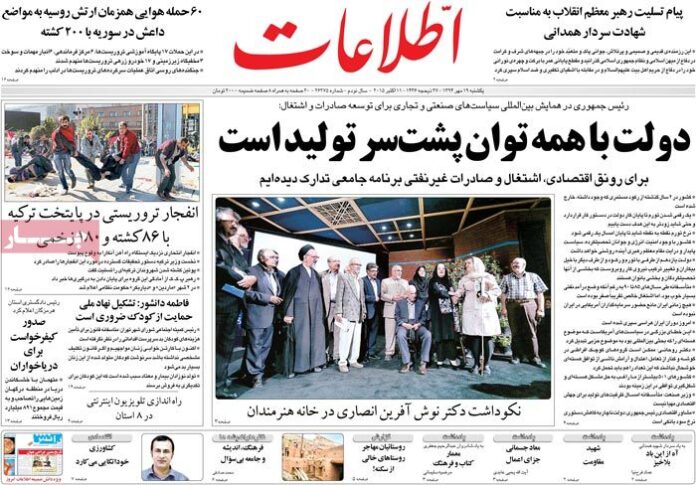 A special look at the headlines Ettela’at newspaper covered on October 11.

♦ “Production has the full support of the government,” said President Rouhani at an international gathering on industrial and trade policies to promote exports and employment.

♦ A ceremony has been held at the House of Artists to praise the services of Noushafarin Ansari, a renowned librarian and educator.

♦ The Supreme Leader has released a message of condolences following the martyrdom of Brigadier General Hossein Hamedani in Syria.

This veteran fighter spent his “pious youth on the battlefields of honor and glory, defending the Islamic homeland and the Islamic establishment” part of the message read.

♦ A terrorist attack in Ankara, Turkey has left 86 dead and 180 others injured. [The toll has now risen to at least 95.]

The Turkish prime minister has ordered a massive investigation into the deadly blasts.

♦ Fatemeh Daneshvar, the chairwoman of the Social Committee of Tehran City Council, has said that formation of a national institute to support children is necessary.

She further said unfortunately there are no legal provisions to cover the costs of children with incompetent guardians.

♦ The head of Hormozgan provincial justice department has said that indictments have been issued against individuals who have reclaimed coastal areas in the southern province.

♦ [As part of a phased project]Internet TV is to be launched in eight provinces.