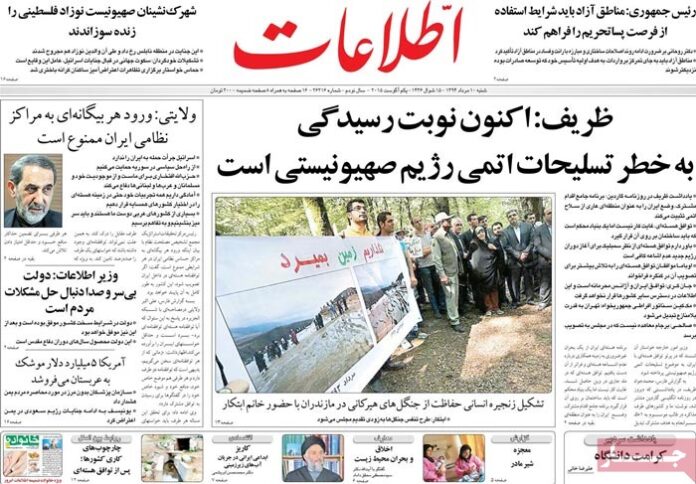 A special look at the headlines Ettela’at newspaper covered on August 1.

♦ Foreign Minister Mohammad Javad Zarif has said that it is now time to review the threat posed by the nuclear arsenal of the Zionist regime.

♦ The president has called on the body that runs the free trade zones to set the stage for the opportunities that arise in the post-sanctions era to be seized.

President Rouhani has stressed the need for continued efforts to introduce structural reforms and fight corruption in free zones.

The Palestinian Authority has blamed the crime on the silence of the international community in the face of Israeli measures.

♦ “Foreigners are not allowed to enter Iran’s military sites,” said Ali Akbar Velayati, an advisor to the Supreme Leader.

The former foreign minister further said that Israel does not dare attack Iran and that Tehran supports a political solution to the crisis in Syria.

♦ Activists have formed a human chain in Hyrcania in Mazandaran Province to protect forestland.

Director of the Environment Protection Organization Masoumeh Ebtekar was on hand.

♦ The intelligence minister has said that government is quietly trying to settle the problems of the public.

“This government has been successful in tough times; it will remain successful from this point forward,” Mahmoud Alavi said.

♦ The US is to sell $5 billion worth of missiles to Saudi Arabia.

Doctors without Borders (MSF) has warned about the conditions of the Yemeni people under siege, and UNICEF has objected to Saudi measures in Yemen.