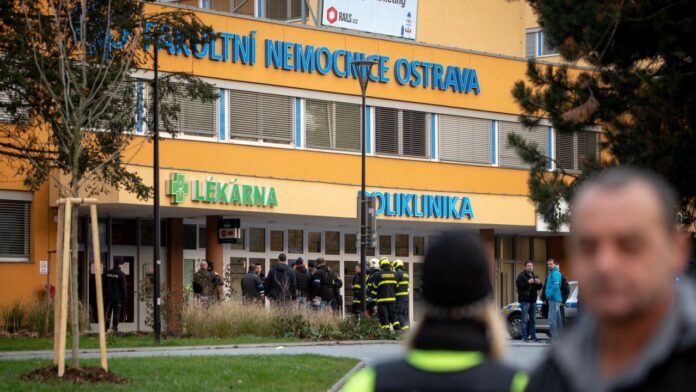 A shooting at a hospital in the Czech Republic has killed seven people, including the 42-year-old gunman.

Another two people have been injured, according to latest police information.

The suspect, a 42-year-old man, escaped the hospital in Ostrava, sparking a manhunt. Police tracked down his vehicle and said he shot himself in his car when officers tracked him down.

On Twitter, officers said, “Police found the car, there was shooting heard from the site.

“We are establishing the identity of the man who shot himself in the head before the police action.”

Video footage from the hospital scene showed police making an arrest but there is no confirmation on who that is.

The first image released by police was later withdrawn, and said to be a witness, not a suspect, Sky News reported.

On Twitter, Czech Police said, “We are currently strengthening the supervision of selected soft targets across the Czech Republic.”

The clinic has been evacuated.

The shooting happened in one of the waiting rooms and prime minister Andrej Babis said the gunman was aiming at people’s heads.

According to local reports, the shooting took place in the hospital’s trauma unit. The nearby university is said to have been closed for the day, with lectures cancelled.

The hospital is in Ostrava, in the eastern Czech Republic.