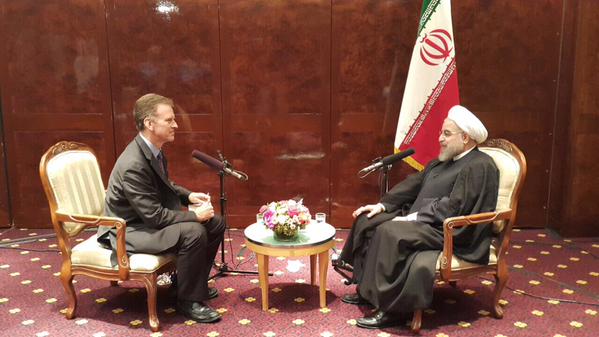 President Rouhani said that Iran's revenues in the post-sanctions era will be spent on the country's economic development.

President Rouhani has said that his government’s priority is to increase production and lower unemployment.

Speaking to Steve Inskeep of National Public Radio (NPR) on the sidelines of his visit to New York to attend the 70th session of the UN General Assembly, President Rouhani said Iran’s revenues in the post-sanctions era will be spent on the country’s economic development.

He said the Joint Comprehensive Plan of Action (JCPOA) has created a new atmosphere in the region and the world, adding “That’s a very important message for the world. It was a complicated issue on which discussions have been held for long years. A group of people believe that negotiations were no solution. We did see that the two sides were patient enough in following the talks for about two years; what matters now is that the talks bore fruit at last.”

He said in the weeks ahead, his government will hand in the draft of the Sixth Development Plan to parliament for ratification.

The plan specifies the country’s priorities in the next five years as well as the volume of investment, said the president, adding that Iran’s population is very young: 65 percent of the Iranian population are below 35 years and many of them are still students. Annually a large number of students graduate and need jobs.

The president said, “In the next two decades 1,300,000 students will graduate who should be provided with employment opportunities. To create necessary jobs and find a solution to the unemployment problem, we need an eight percent economic growth and that means we will need $150 billion in investment annually based on economic estimates.

For the same reason, many companies and those active on the economic front come to Iran from Europe and Asia, study our programs and hold talks. In order to attract their capital to the country and gain an eight percent economic growth for the youth, our priority will be to create employment opportunities. Our priority is to scale down unemployment.”

President Rouhani said insecurity in the region can have adverse consequences for all regional states, adding “So security in Syria and or Iraq is of high importance for us. We will follow any solution which will lead to stability and security so that the entire regional countries will be secure.”

On JCPOA, President Rouhani quoted Supreme Leader of Islamic Revolution Ayatollah Ali Khamenei as saying if nuclear agreement is fully implemented and the US abides by its promises in action, other issues might also be taken into consideration.

On Syria, he said Iran is in talks with regional countries as well as the European Union.

He added, “So we are not indifferent to the Syrian issue. We are concerned both about Syria and the Syrian people. A number of people are killed or displaced daily and you know even old and historical monuments are destroyed and ruined by terrorists. All of these are sources of concern. Iran will do what it can within its power in connection with Syria’s security.”