Government has Plans A and B for post-nuclear talks era 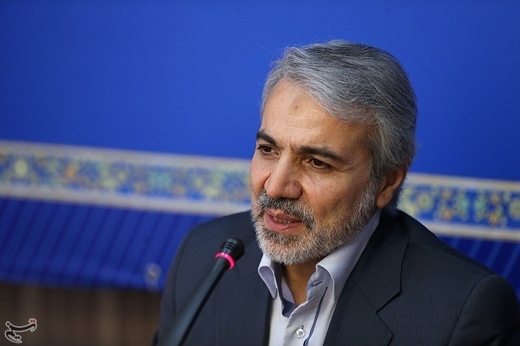 The government spokesman has said that the Rouhani administration is trying to loosen the noose of unjust sanctions around Iran’s neck and does not let some individuals derail nuclear talks.

The government spokesman has said that the Government of Prudence and Hope is still grappling with the problems it has inherited from the previous government, adding the eleventh government has been held hostage to wrong decisions of the past.

Mohammad Bagher Nobakht, who is also the vice-president and head of the Management and Planning Organization, made the comment Monday in a ceremony in Kermanshah to mark the second anniversary of President Rouhani’s election and added that government has Plans A and B for the country whether or not nuclear talks produce a deal.

Entekhab.ir on June 16 released a report on his remarks in the ceremony. The following is the translation of part of what Nobakht said in the western province:

Nobakht took a swipe at the previous government’s implementation of the subsidies act and said that government has paid more than $2 billion in cash subsidies in the first two months of this year (March 21- May 21) to 76 million people who receive the monthly handouts, but it has failed to allocate even one rial to developmental projects because of budget crunch.

On nuclear talks, he said President Rouhani still insists on what he said on the campaign trail that “Centrifuges have to spin, as the wheels of people’s lives do”, adding Iran’s nuclear team is pursuing efforts to have the unfair sanctions removed as it tries to maintain the country’s glory and dignity.

The country is capable of producing four million barrels of oil, but cannot sell more than one million barrels because of sanctions, he said, adding this has decreased government’s revenues dramatically.

Nobakht then recalled a slump in crude prices and said, “We have to count on $24 billion in foreign exchange to manage the country. This comes as we have thousands of incomplete projects and many other problems on our hands to deal with. We cannot bring the money ($24 billion) into the country and we need to remove the obstacle standing in the way of that money”.

Government is trying to loosen the noose of unjust sanctions and does not let some derail nuclear talks and throw obstacles in their way, he added.

The spokesman also said that Israel is concerned about the course nuclear talks have taken and added, “An American official may make a comment in their circle [Israelis’]. That [the baseless comment] should not be repeatedly aired by the national broadcaster. Why should we repeat the baseless comments? We welcome those who are concerned to step forward and speak their mind, but certain media outlets seem to simply instill dismay and frustration into society, whereas our nation is hopeful [about the future].”

The vice-president went on to say that government has made preparations for any circumstances, adding it is ready for a breakthrough nuclear deal which would earn the country tens of billions of dollars and has a Plan B if the talks end inconclusively.

“We need to have proper planning to make proper use of resources,” he said, adding that lack of planning in the previous government caused the country’s economic growth to land in negative territory (-5.7%) with many unfinished projects and a growing number of jobless people despite $800 billion in revenues it earned.

“We have prepared ourselves for tough times, but we are very much hopeful about the conclusiveness of the talks. We are not insisting that they [the talks] produce a result by the-end-of-June deadline, but we do what is needed to lift the burden [of sanctions] from people’s shoulders.