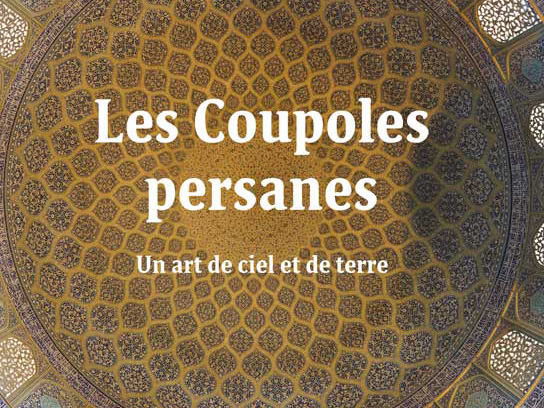 A book on Iranian art and architecture, titled 'Les Coupoles Persanes', (in English 'Persian Cupolas: the Art of Skies and the Earth') has been published in France.

“Persian Cupolas: the Art of Skies and the Earth” is written by Patrick Ringgenberg; a specialist in Iranian-Islamic arts and Iranologist. It won the World Prize for the Book of the Year of the Islamic Republic of Iran and Farabi International Award in 2012. It is now available in French bookstores, Mehr News Agency reported.

“Jean Chardin (1643–1713), French jeweller and traveller wrote in the 17th century that there is no country in the world where so bold and beautiful domes are made,” the author said in the book’s preface.

In another part of the book, Ringgenberg says, “In antiquity, the brick domes crowned the Zoroastrian palaces and temples of the Sassanids; in the Islamic period, they are splendid and audacious, the often fundamental element of mausoleums, mosques, palaces, bath houses and bazaars.”

Focusing on the structure and architecture of the Persian domes, the author believes they are “matrix of imaginary, and symbols of the sky”.  He describes cupolas as having structural, thermal and acoustic properties; which are perfectly adapted to the climatic conditions of the Iranian Plateau and to a thousand year-old living art. The decoration of stars, plant motifs, calligraphy, and even figurative representations, is also the synthetic repertory of a royal, religious, poetic and cosmological culture.

Here are photos of some domes illustrated in this book:

Beauty and Depths of Structures

The book uses over 200 colours in paper prints to perfectly reflect the beauty and depth of the structures.

Ringgenberg has academic degrees in visual arts: cinema-video, and theology in Sorbonne. He received his Ph.D. degree in history of art in University of Geneva in Switzerland. He is currently working as a researcher at the Institute of Religion, Culture and Modernity (IRCM), University of Lausanne in Switzerland. ‘The Shrine of Imam Reza in Mashhad’ (2016), ‘The Ornament in the Arts of Islam’ (2015) and ‘The Symbolic World of Islamic Art’ (2009) are his other books on Iranian and Islamic art.

‘Persian Cupolas’ explores the beauty and significance of the Persian cupolas, from ancient Iran to the 20th century.

Here is the video the publisher has released on its official website with French captions to introduce the book: