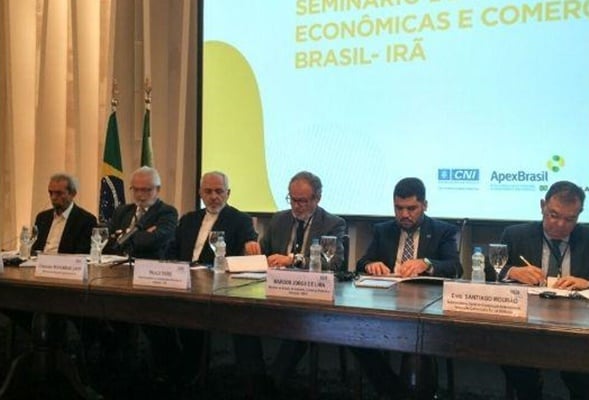 Iran’s Foreign Minister says the lack of banking relations between Tehran and Brasilia is one of the major obstacles to the development of mutual ties, stressing that a solution must be found for the problem.

Mohammad Javad Zarif made the comments on Tuesday during his official visit to the South American country along with his entourage.

Following you can find the full text of the Iranian foreign minister’s statements addressing a group of businesspeople and entrepreneurs from both countries:

I am very pleased to be accompanied by a delegation of public and private sector economic actors from the Islamic Republic of Iran who work in the fields of banking, investment, automotive industry, pharmaceuticals and healthcare, electrical and water industries, agriculture and food industries, higher education, transportation, urban engineering, oil and petrochemicals, as well as major knowledge-based companies who have joined the businesspeople, and economic industrial actors of the Republic of Brazil at this meeting. Indeed, the holding of this conference and the participation of a number of economic actors from the two countries reflect the existence of a common political will to promote the presence, participation and greater role of the two countries’ private sectors to improve the economic and commercial relations of both sides.

In Iran, we have been successful in the heavy industries sector including oil and gas refineries, cement and steel factories, mines, auto industry, and agriculture. In recent years, we have also been able to take good steps in the field of new technologies such as nanotechnology and the development of knowledge-based companies thanks to our educated and expertly-trained staff.

In the healthcare domain, the Islamic Republic has been able to achieve major success in manufacturing medical, hospital, and dentistry facilities besides production and export of recombined medications. Further development of these areas require foreign participation; therefore, we welcome the Brazilian companies to enter the Iranian market.

On behalf of myself and the Iranian colleagues here, I announce that Iran is ready to cooperate with the Brazilian companies in joint investments and implementation of projects using modern technologies.

There are also many opportunities for foreign companies in the field of construction and equipping of houses, rail, road and air transport, as well as the development of maritime ports. Given the presence of capable and experienced companies in Brazil, the country can work in these fields as well.

In our view, Brazil is one of the great developing economies with many capacities. Brazil is an important supplier of food and is in possession of advanced industries such as airplanes, steel, oil and gas, ethanol, mining, and agriculture, and can be an important partner for the Islamic Republic of Iran in the Middle East. Iranian officials welcome the development of these capacities in bilateral relations as well as with the third parties.

Currently, the Islamic Republic of Iran, as Brazil’s first trade partner in the Middle East with a trade volume of $2.6b, is a good and reliable market for Brazilian companies. These companies can consolidate their presence in Iran’s market and also use Iran’s facilities to export to the 600-million-people market of Iran’s neighboring countries, including Central Asian states, the Caucasian countries, Iraq and Afghanistan.

Given the advantages of Iran for foreign investors at the current time, investment in Iran has a high relative advantage. These advantage include:

Increasing bilateral interactions requires the creation of an appropriate situation by the two governments with the participation of the private sector. The lack of banking relations between the two countries is one of the major obstacles in the development of mutual ties, and we expect Brazil’s government and the economic sectors to find a solution. Certainly, with regard to the capabilities of the two countries, the establishment of banking cooperation will contribute to the development of the ties. The use of local currencies in commercial transactions in the form of a currency swap and creation of a joint bank committee with the Bankers Association of the two countries is a good solution to deal with the problems and challenges in this regard.

We also welcome the impressive Brazilian government’s move to supply a $ 1.2 billion credit line for Iranian and Brazilian companies to implement projects, which is an important step in developing bilateral trade relations between the two countries. I hope the final technical negotiations over it will take place as soon as possible.

Increasing the activities of the private sector requires the attention of the two country’s political officials. Therefore, outlining a vision for collaborations, and setting a goal to increase the bilateral trade volume to an acceptable level in line with existing capacities in the near future should be on the agenda of both sides.

I am going to hold talks with the Brazilian authorities on ways to facilitate the presence and communication of Iranian and Brazilian businessmen, as well as paying particular attention to the economic cooperation between the two countries, especially in the above-mentioned areas in which the two countries have a comparative advantage.

I hope the businesspeople of the two countries will make most out of the opportunity provided by this conference and reach good agreements to promote cooperation.

Dear businesspeople and economic actors, I wish you good luck and I guarantee that all the capabilities of the Islamic Republic of Iran will be used to develop ties between the private and public sectors of the two countries.

Thanks for your attention