Figures Say Number of Foreign Tourists to Iran Peaked in 2016

Official figures indicate that the number of foreign tourists visiting Iran has witnessed a remarkable increase during President Hassan Rouhani’s four-year term, reaching its peak after the implementation of the nuclear deal between Tehran and world powers in 2016.

As shown by official figures, Iran, as a tourist destination, has gained greater popularity among foreigners in the past four years, particularly after the beginning of the implementation of the Joint Comprehensive Plan of Action (JCPOA), the nuclear deal signed between Iran and six world powers, in 2016, which is a tangible achievement by the country’s incumbent government.
According to a Farsi report by the Vaghaye Ettefaghieh newspaper, over the past few days, discussions about issues pertaining to Iran’s upcoming presidential elections (due to be held on May 19) gradually began to overshadow other topics and news. The spontaneous creation of the hashtag #Tangible_Changes, as a reaction to the performance of the Rouhani administration, started an interesting trend in social network, to which a large number of social media users responded by mentioning the positive changes they had witnessed in the past four years since the beginning of President Rouhani’s term in office.
One of the comments, written in response to the hashtag, read: “These days, happy and surprised foreign tourists are seen in every part of Tehran, while strolling along and having fun. And this means #Tangible_Changes [have been made].”
Confirming reports and claims by eyewitnesses, official figures also indicate that since 2013, particularly following the signing of the nuclear deal, also known as the JCPOA, [between Tehran and P5+1] in 2015, the number of foreign tourists visiting Iran has experienced an unprecedented growth.
Tourism experts give numerous analyses of the spike, stressing that the international community’s changed attitude towards Iran, which has led to the formation of a positive image of the country in people’s mind, has greatly contributed to the growth. Nevertheless, it should be noted that Iran is still far from having the necessary tourism infrastructures.
However, by making Iran a safe and secure place for foreign tourists, the first step has been taken successfully to guarantee their greater presence in the country.
The number of tourists from Germany (29,000), France, Italy, Russia, the Netherlands, the UK, Sweden, Austria, Spain and Switzerland (4,000) to Iran has been subject to a gradual increase over the past four years, placing them among the top 10 countries in terms of the number of tourists visiting Iran in the world. 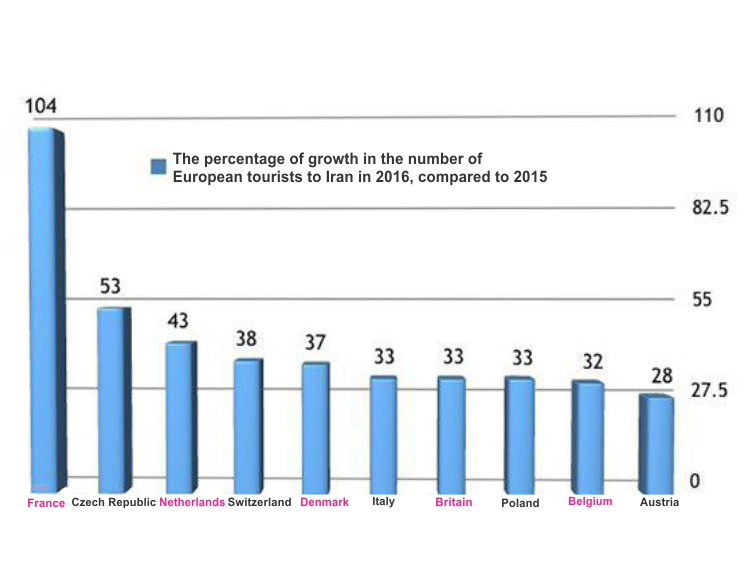 The diagram presented above, shows the rise in the percentage of European tourists to Iran from March 20, 2016 to September 21, 2016 compared to the corresponding period in 2015. The increasing trend began after the signing of the nuclear deal and, then, became quite noticeable in the first few months after the beginning of JCPOA implementation. The number of foreign visitors to Iran in 2015 indicated a 3-percent growth compared to that of a year ago.
This is while, as more time elapsed since the Implementation Day of the JCPOA (January 16, 2016), in view of the efforts to present Iran as one of the world’s important tourist destinations, the number of foreign visitors to the country during March 20, 2016-September 21, 2016 witnessed an increase of 40-percent compared with the figure for the same duration of last year.
Figures by Iran’s Cultural Heritage, Handicrafts and Tourism Organization (ICHTO) show that in this period, 117,619 foreign tourists visited Iran. In the same time span in 2015, the figure stood at 87,314.

During the six-month period in 2016, France ranked first in terms of witnessing the highest growth (104.1 percent) in the number tourists to Iran after the going into effect of the JCPOA, followed by the Czech Republic (53.4 percent) and the Netherlands (43.3 percent).
This rise occurred while, although Western sanctions against Tehran has been lifted, foreign tourists still were (and are) faced with a number of problems, posed by the Western society, for travelling to the Middle Eastern country. For instance, a few while ago, in its post-JCPOA resolution, the US Congress announced that the citizens of those 38 countries whose nationals can usually enter the US without a visa, per the Visa Waiver Program, such as Britain, France and Japan, will require to obtain a visa to be allowed entry to the country, should they have been to Iran once even as a tourist.
Despite such limitations, the ICHTO managed to play host to a large number of Europeans in 2016, in view of the improved atmosphere pervading Iran’s foreign relations in the post-JCPOA era.