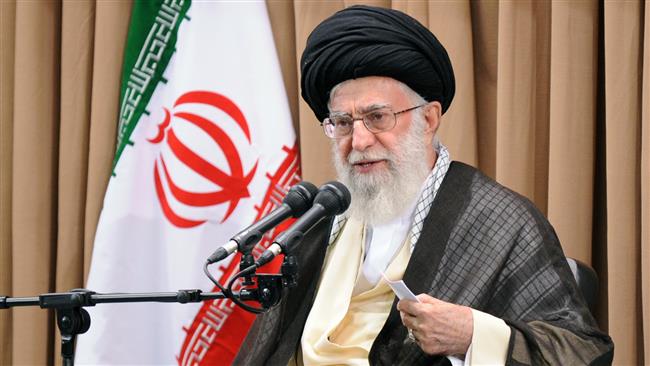 The Leader expressed Iran’s firm opposition to “unconventional inspections, questioning Iranian figures, and the inspection of military sites” as red lines for the country.

Leader of the Islamic Revolution Ayatollah Seyyed Ali Khamenei says Iran seeks to reach a fair deal with P5+1 over its nuclear program, one that will serve the country’s national interests.

“All Iranian officials, while insisting on [the country’s] red lines, are pursuing a good deal which is fair and honorable and in line with Iran’s interests,” the Leader said in a meeting with the heads of the three branches of government and other senior officials on Tuesday.

A study of the American demands shows that they intend to turn Iran’s nuclear industry into a “caricature” after dismantling it and abolishing the country’s nuclear identity, the Leader added.

Ayatollah Khamenei stated that the Americans are also making efforts to deprive the Iranian nation of the great advantages of nuclear industry while maintaining pressure and sanctions against the Islamic Republic.

The Leader said Iran has always made rational demands since the beginning of the talks with P5+1 and emphasized that all “cruel sanctions” on Tehran over its nuclear program must be lifted.

Ayatollah Khamenei commended the Iranian nuclear negotiating team for its faithfulness and bravery in the talks, and said the negotiators are meticulously making efforts to settle the outstanding issues.

The Iranian negotiators have managed to bravely announce Iran’s stance on the nuclear issue, the Leader said, adding that they may possibly make some mistakes but they are “brave and faithful”.

He pointed to all nuclear powers’ refusal to sell 20 percent enriched fuel to Iran for the production of nuclear medicine at the Tehran Research Reactor and said young Iranian scientists have succeeded in producing the fuel and confounding the opposite side.

Ayatollah Khamenei reaffirmed the Islamic Republic’s red lines in its nuclear negotiations with P5+1 and said, “Despite insistence by the Americans, we do not accept long-term restrictions [on nuclear activities] for 10 or 12 years. We have told them how many years of restrictions is acceptable to us,” the Leader said.

He stressed that proceeding with research and development in the field of nuclear technology even during the time of restrictions is another red line for the Islamic Republic.

The Leader further emphasized that all economic, monetary and banking sanctions imposed by the United Nations Security Council and the United States against Iran must be immediately lifted on the day of signing a possible final nuclear deal while other bans must be terminated based on a rational timetable.

“The lifting of sanctions must not be contingent on the implementation of Iran’s undertakings. They should not say that you (Iran) should fulfill your commitments and the [International Atomic Energy] Agency (IAEA) should then verify it in order for the sanctions to be lifted. We do not accept this issue at all,” Ayatollah Khamenei stated.

He said Iran opposes the P5+1 group’s fulfillment of its commitments after the IAEA’s report “because the agency has repeatedly proven that it is not an independent and fair body and so we are pessimistic about it.”

The Leader further expressed Iran’s firm opposition to “unconventional inspections, questioning Iranian figures, and the inspection of military sites” as other red lines for the country.