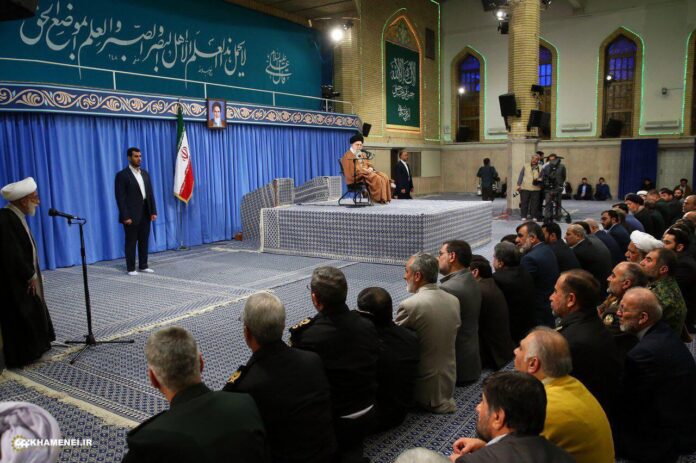 Ayatollah Seyyed Ali Khamenei, the Leader of Iran’s Islamic Revolution, has warned of enemy plots to make the Iranian nation disappointed and sceptical of the Islamic Establishment.

Speaking in a Wednesday meeting with a group of officials in Tehran, Ayatollah Khamenei said the enemy is trying to make the Iranian people frustrated and sceptical and destroy their self-confidence using “thousands of propaganda artilleries” aimed at the nation.

“Our main enemy, the US, is one of the world’s most corrupt and cruel governments. They have supported terrorists and ISIS as much as they can, and are still sponsoring ISIS and similar Takfiri groups covertly,” he added.
“The US has supported dictators, the Shah of Iran, the Saudi rulers, and cruel dynasties in the region. They support the criminals who are committing crimes in Palestine and Yemen,” the Leader noted.
“Americans commit crimes inside their own country; the US police kills black women, children, and youths without any justifiable excuse, and yet they are exonerated in the court!”
“Despite having such a judicial system, they raise criticism against the judicial systems of other countries, including Iran,” the Leader added.

The Leader expressed regret that a group inside Iran is exactly following in the enemy’s footsteps, making people disappointed by raising accusations and telling blatant lies.

Ayatollah Khamenei harshly criticized these people for making the enemies of Iran happy at the expense of people’s frustration.

The Leader particularly referred to those who have had all the country’s facilities in their hands and are now playing the role of an opposition figure instead of being accountable.

“Those who have been or are in power are not allowed to speak against the country; they must be accountable,” Ayatollah Khamenei noted, adding that this is unacceptable to people.