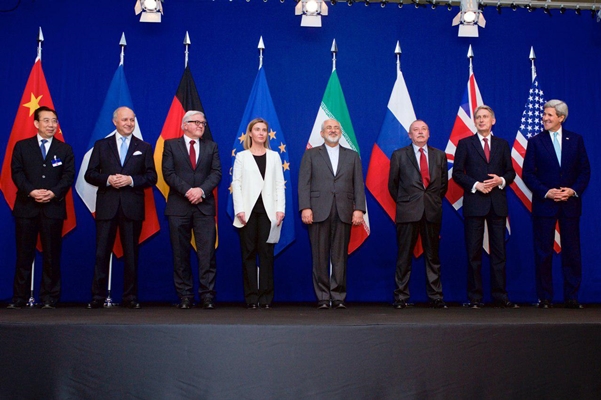 The three European powers – France, Britain, and Germany – have reaffirmed their commitment to the 2015 nuclear deal with Tehran on the fourth anniversary of clinching the deal.

In a joint statement France, Germany, and the United Kingdom said:

We, the leaders of France, Germany and the United Kingdom, sharing common security interests, in particular upholding the non-proliferation regime, recall our continuing commitment to the Joint Comprehensive Plan of Action (JCPoA) that was agreed upon four years ago with Iran, on 14 July 2015.

Since 2003, our three countries, later joined by the United States, Russia and China, have been engaged in a long-standing and determined policy vis à vis Iran with the clear objective that this country, a party to the Non-Proliferation Treaty, respects its obligations in good faith and never develops or acquires a nuclear weapon.

Together, we have stated unambiguously on 8 May 2018 our regret and concern after the decision of the United States to withdraw from the JCPoA and to re-impose sanctions on Iran, while this country had implemented its commitments under the agreement – as consistently confirmed by the IAEA until last month. Since May 2018, our three countries have made their best efforts to work with all the remaining parties to the deal to ensure that the Iranian people could continue to benefit from the legitimate economic advantages provided by the JCPoA.

Today, we are concerned by the risk that the JCPoA further unravels under the strain of sanctions imposed by the United States and following Iran’s decision to no longer implement several of the central provisions of the agreement. We are extremely concerned by Iran’s decision to stockpile and enrich uranium in excess of authorised limits. Moreover, our three countries are deeply troubled by the attacks we have witnessed in the Persian Gulf and beyond, and by the deterioration of the security in the region.

We believe the time has come to act responsibly and seek a path to stop the escalation of tensions and resume dialogue. The risks are such that it is necessary for all stakeholders to pause and consider the possible consequences of their actions.

Our countries have recently taken several diplomatic initiatives to contribute to de-escalation and dialogue, for which signs of goodwill are urgently needed, from all sides. While we continue to support the JCPoA, its continuation is contingent on Iran’s full compliance, and we strongly urge Iran to reverse its recent decisions in this regard. We will continue to explore the avenues of dialogue foreseen under the agreement to address Iran’s compliance, including through the Joint Commission of the JCPoA.

In search of a resolution we will continue our active engagement with all interested parties, in the interest of the preservation of international peace and security.