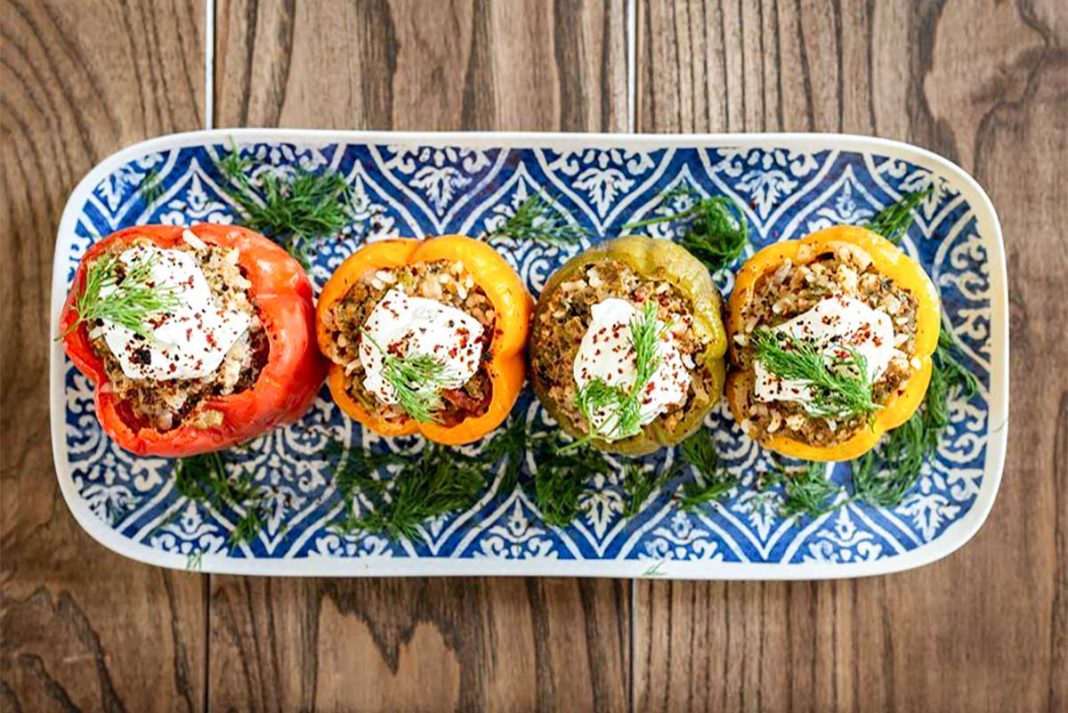 Dolma Pepper of different colors coupled with a variety of ingredients make dolmas not only colorful but also extremely tasty and nutritious.

To cook different dolmas, you should follow all but the same instructions which start with hollowing out the vegetables and blanching them to have their texture quite soft.

Besides, the filling used in different kinds of dolmas is almost the same.

What might render making this dish quite challenging is wrapping the filling in cabbage, lettuce or grape leaves skillfully enough so that they won’t fall apart while cooking. 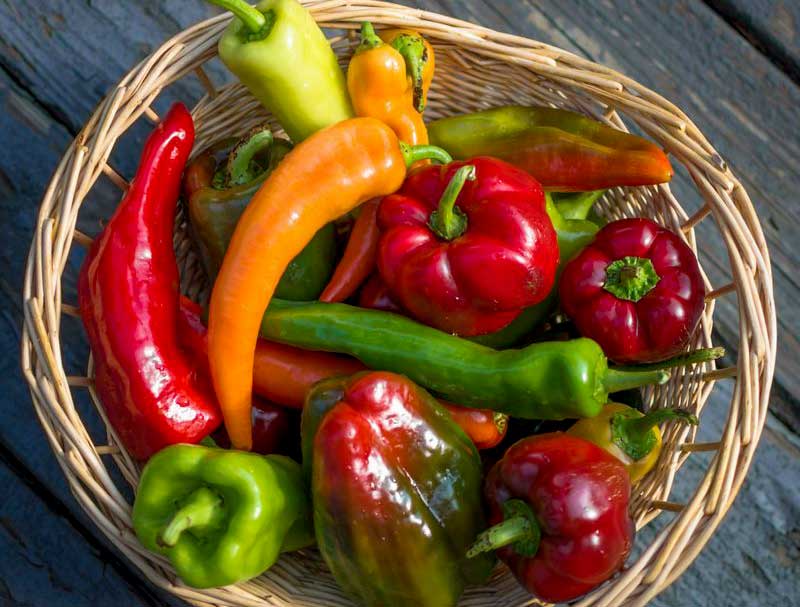 As for bell peppers, eggplants and tomatoes, a lack of such skill won’t get you into trouble. Because after removing the inside of these vegetables, you can simply put the filling inside.

Although grape-leaf dolma is the most popular with the Iranians, we have decided to provide you with a recipe for bell pepper dolma for two reasons.

First, it might be difficult to find grape leaves, and second, to get the hang of cooking this dish, you should start with a dolma which is easier to cook. 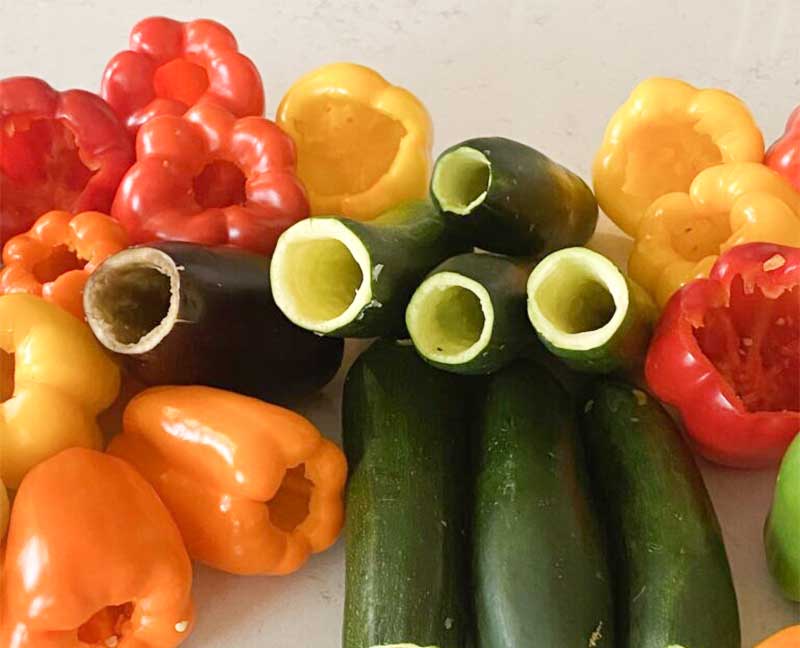 8. Two large onions – which should be peeled and thinly sliced. 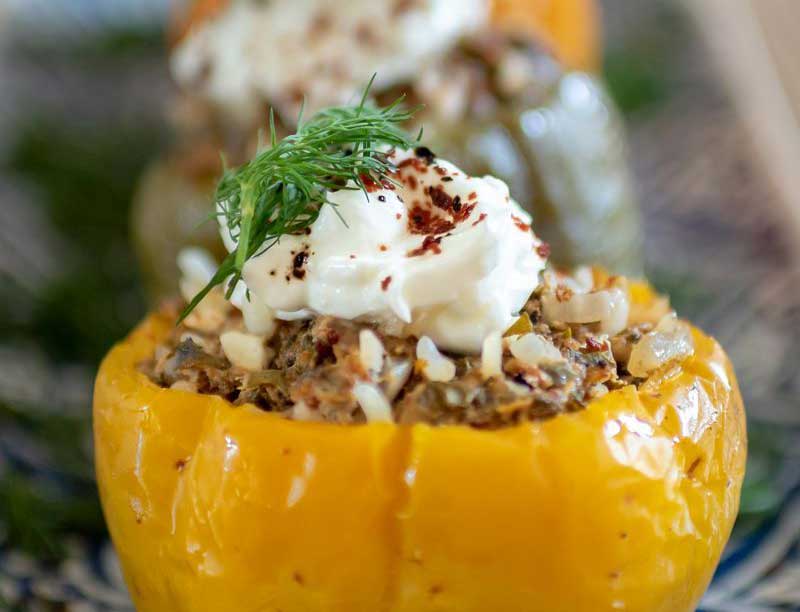 How To Make Dolma Pepper

1. Wash the rice a few times and soak it in brine for a few hours. Pour some water in a pot and bring it to the boil, then add in the rice to the boiling water; leave it there until it is al dente.

The rice should be neither too hard nor too soft. Depending on the kind of rice, it might take a few minutes (less than 10). Afterward, drain the rice.

2. Fry the slices of one onion in a frying pan with salt, ground black pepper, turmeric and garlic powder until they turn golden brown.

Then add some water to it and let it simmer until the meat is cooked. By the time it is cooked, the sauce should be thick. 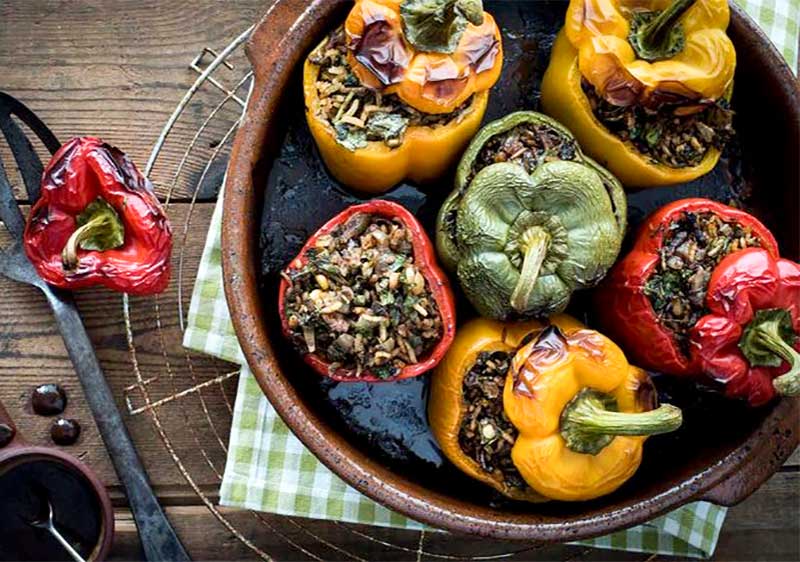 3. Sauté the herbs for a few minutes and then add them to the meat. Afterward, add in the rice to the mix.

Some people prefer the filling to have a sweet-sour taste, so they add vinegar and sugar to the mixture to adjust its taste to their liking. But you can exclude sugar and just add vinegar or lemon juice to taste.

Don’t forget to adjust seasoning to make sure that the filling tastes perfect.

4. Cut off the top part of all bell peppers [without removing the stems] and put them aside; the removed round tops will act as a lid covering the stuffed bell peppers later. Hollow out the peppers. Make sure no seeds are left inside. Blanch the bell peppers for a few minutes and stuff the filling into them by the time they cool off. Then put the top back on. 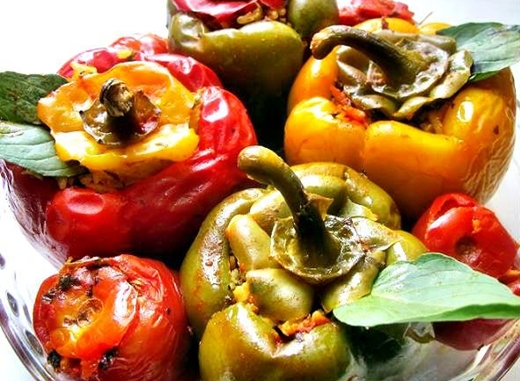 5. Add in the slices of the other onion into a pot and fry them over a medium heat until they turn soft and golden brown, add turmeric, pepper and salt.

Spoon in two tablespoons of tomato paste and sauté it for a few minutes. Then place the stuffed bell peppers in the pot.

Gently pour some chicken or vegetable stock into it, so that the arrangement of the peppers is not disturbed.

The stock does not need to cover them. Exclude the salt if the stock is already salty. Dolmas need to be cooked slowly over a low heat. 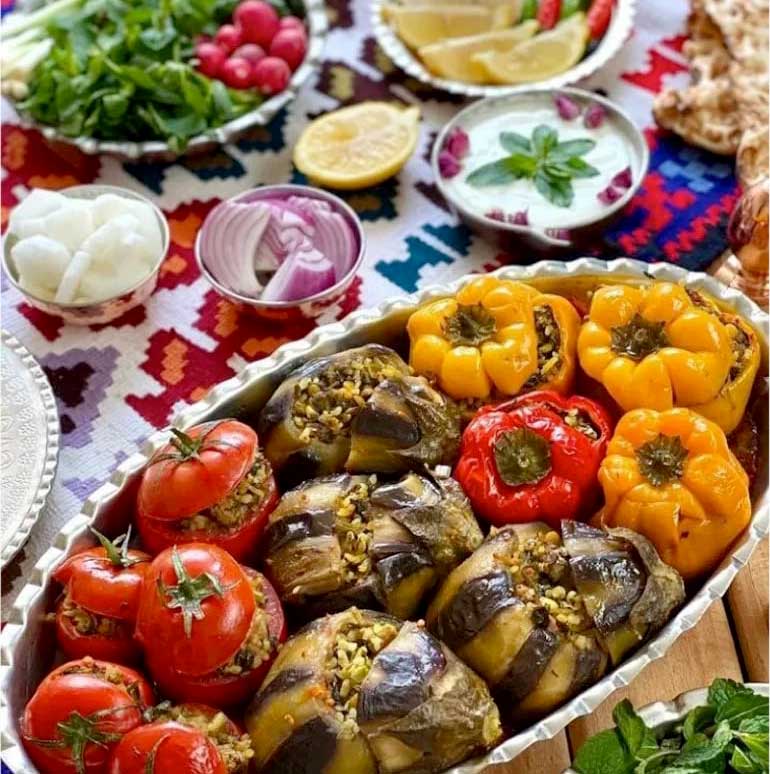 There is also another way for cooking Dolma Pepper.

In the method explained above, we place the bell peppers in rows inside the pot and cook them over the stove flame. In this method, however, we cook them inside the microwave oven.

Now, set the bell peppers aside.

Here, boil the potatoes. When they are well done, peel the potatoes and crush them. Then, wash the mushrooms and slice them.

Slice the onions and fry them. Add some salt and turmeric to it before adding the potatoes, which are already mashed together with some milk and butter. 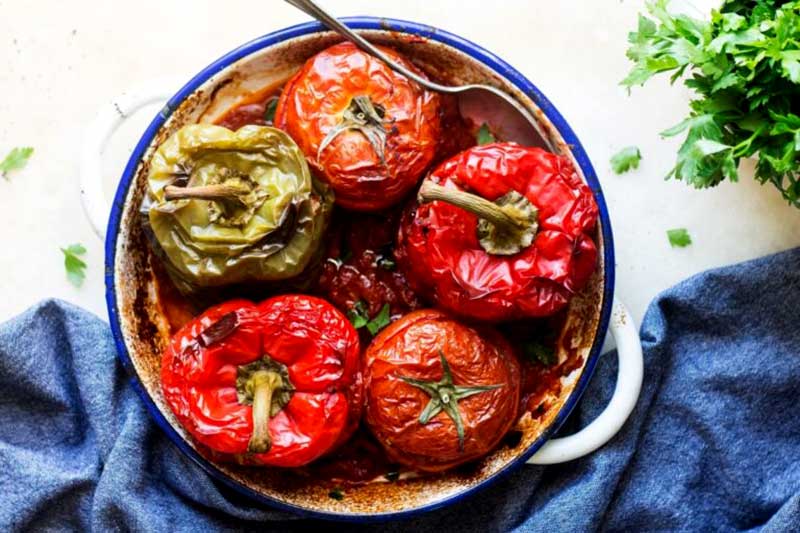 Add some chopped parsley and sweet basil to the ingredients together with the sliced mushrooms, and mix them well.

It is now the turn of saffron and, finally, some grated pizza cheese. Then, mix the ingredients well until they are uniform.

When the ingredients are well mixed, fill each bell pepper with them. Pour some cheese on top of the bell peppers and put them in rows inside the oven tray, which is already lubricated with some oil.

Turn the microwave oven on and set it to 180 degrees centigrade. Put the tray inside and let it stay there for 20 minutes.