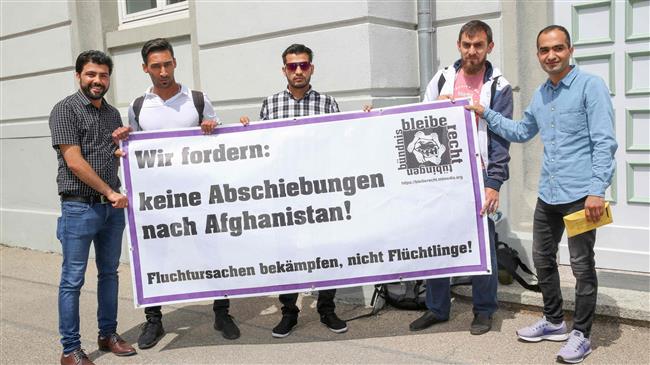 The German Interior Ministry says one of 69 Afghan refugees it deported last week has committed suicide on the way back home.

According to the Afghan authorities, it was a suicide,” a German Interior Ministry official told a news conference on Wednesday, adding, “We received confirmation from the Afghan authorities today morning that one of passengers on the repatriation flight was found dead in accommodation in Kabul.”

The death comes amid rising tensions within the German government about how the country should deal with refugees. German Interior Minister Horst Seehofer has been pressing Chancellor Angela Merkel to change her refugee policy although Merkel insists such a change should come within a united European Union agenda.

Seehofer had welcomed the deportation of Afghan refugees last week, saying on Tuesday that the 69 Afghans had left on his 69th birthday.

Merkel allowed more than a million refugees into Germany since she ordered borders open in early 2015. Now, she faces a growing challenge of protecting her shaky coalition government in the face of criticism from both allies and foes about her refugee policy.

To mitigate those concerns, Merkel has tried over the past years to reach agreements with other countries for the relocation and deportation of refugees. Among them was one such agreement with Kabul which went into effect in December 2016.

The deportation of the 69 Afghans on July 4 was the largest collective deportation of failed Afghan asylum seekers yet. Authorities had mostly deported Afghans with criminal records. Berlin also halted the deportations in May 2017, when a truck bombing in front of the German Embassy in Kabul killed more than 90 people and injured some 400 others.

Some 51 of those deported last week were from Bavaria, the state where Seehofer’s conservative CSU party rules. Sources within the regional government have indicated that Germany’s federal government has recently approved unlimited deportations to Afghanistan. Seehofer, however, said last week’s deportations were not ordered by him.

Afghan authorities have reportedly criticized Germany for sending such a large group which exceeded the 50 per flight cap agreed before.

Rights groups have censured the deportations, saying refugees are being returned to Afghanistan amid a deteriorating security situation in the country as Taliban and other militant groups have intensified attacks on civilians.